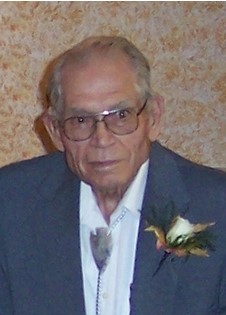 A viewing will be held Friday evening at Davis Funeral Home.

He moved to Fremont County in 1933, living in Crowheart, Dubois, and Lander, before settling in Riverton, where he has been since 1973.

He received his GED from Central Wyoming College in 1980, at the age of 69.

Mr. Dierks had worked in farming, 5 years for the U.S. Forest Service, and construction, having been employed by Gilpatrick Construction as a superintendent for 30 years.

The family said he loved farming, and enjoyed rock collecting, making rock jewelry, traveling, and was an avid hunter and fisherman. He loved baseball and had played semi-pro ball in Idaho.

In addition to his wife Jeanne, he was preceded in death by his parents, Karl and Helen Dierks; a son Bill in 1970; son-in-law Ralph Mulherin; great grandson Trenton Patterson; great granddaughter Ashley Grim and sister Gladys Corkill.

Memorial donations may be made to the National Federation of the Blind, in care of Davis Funeral Home, 2203 W. Main, Riverton, WY 82501.