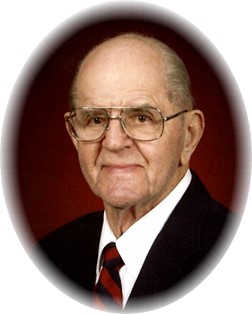 Guestbook 6
Long-time Riverton dentist Clayton A. Axthelm died Sunday evening, Oct. 5, 2008. in Missoula, Mont. He was 92. Memorial services will be at 10 a.m. Saturday, Oct. 11, at the United Methodist Church of Riverton. Inurnment will follow at Mountain View Cemetery in Riverton following the services with Military Honors by the Wyoming Army National Guard. Clayton August Axthelm was born in Martell, Neb., on Oct. 16, 1915, the son of Elmer A. Axthelm and Grace (Graham) Axthelm. He had a fraternal twin brother, Cecil A. Axthelm. He moved with his parents to Gothenburg, Neb., during his elementary school years and he was graduated from Gothenburg High School in 1933. After several years of working, Mr. Axthelm enrolled at the University of Nebraska in a pre-dental course. He was graduated from the University of Nebraska Dental College with the degree of Doctor of Dental Surgery (D.D.S.) in 1945. He ranked first in his class and was offered a position as an instructor of operative dentistry in the Dental College, where he worked for two years, 1945-1947. On Jan. 5, 1947, he married Marjorie Jane Adams at St. Paul Methodist Church in Lincoln, Neb. When Dr. Axthelm decided he wanted to enter private practice, they moved to Riverton in 1948. He worked as a dentist until 1990, when he was 75 years of age. He was joined by his brother, Dr. Norris Axthelm, in the early 1950s and they shared an office in the Masonic Temple Building in Riverton for over 40 years. His family said "Their patients became their good friends." From 1951 to 1953, Dr. Clayton Axthelm served as a Captain in the U.S. Air Force. Upon completion of military service, he returned to Riverton to resume his dental practice. Mr. and Mrs. Axthelm had three children -- Steve, born in 1948, Paul, born in 1951, and Jane, born in 1952. Dr. Axthelm's activities were in line with the progress of Riverton. He was a member of the Fremont District 25-Riverton School Board for six years. He served as president of the Lions Club. He was on the Wyoming Board of dental Examiners for two terms and was a life-member of the Wyoming Dental Association. He was also a member of the University of Nebraska Dental Alumnae. Dr. Axthelm had been a member of the Riverton Methodist Church since 1948 and served on many boards and committees. Dr. Axthelm was an active supporter of sporting events in Riverton and the surrounding communities. He received a plaque for being an outstanding fan of all sports. His family said he loved to fish and camp with his family at Colter Bay on Jackson Lake, where the family gathered several times each year. He was good at woodworking and "fixing things." Dr. Axthelm is survived by his wife, Marjorie Axthelm of Riverton; sons, Dr. Steve Axthelm and his wife Judi of Grand Junction, Colo., and Dr. Paul Axthelm and his wife, Danelle, of Riverton; daughter, Jane Mrkich and her husband, Dale, of Missoula, Mont.; nine grandchildren; two great grandchildren; surviving sisters, Ethel VanWey of Gothenburg, Neb., and Mildred Umshler of Cozad, Neb.; surviving brothers, Dr. Norris Axthelm of Riverton, and Glen Axthelm of North Platte, Neb. Preceding him in death were his parents, and brothers, Kenneth Axthelm and Cecil Axthelm. Memorials in his name may be made to the Riverton United Methodist Church, 1116 West Park, Riverton, WY 82501. On-line obituaries are available and condolences for the family may be made at: thedavisfuneralhome.com Services are under the direction of the Davis Funeral Home of Riverton.