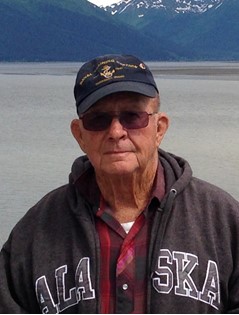 Guestbook 7
Robert “Bob” Korthaus, 95, of Riverton passed away on Monday, June 1, 2020, at the Help for Health Hospice Home. A Celebration of Life will be held at 2:00 pm on Saturday, June 6, 2020, at the home of his daughter, Jacky Kobbe, 345 Fairway Drive, Riverton, WY with military honors presented.

Robert E Korthaus was born on April 2, 1925 in Hot Springs, SD to Emil and Lenora (Parker) Korthaus. He attended schools and graduated from Hill City, SD.

After graduation Bob joined the U.S. Navy and proudly served his country during WWII. He served on the ship “Texas” and was honorably discharged as a Radioman Third Class on June 4, 1946 in San Pedro, CA.

Bob returned to South Dakota where he met and married Verle Anderson on December 18, 1948 in Hill City, SD. Together they had three children, Nancy, Jacky, and Dennis, while living in many different areas of Wyoming.

Bob began his work life with the USDA Forest Service. He then spent the majority of his life working as an oilfield superintendent for Texaco Oil Company all over the state of Wyoming during his 35 year career.

He was a member of the Veterans of Foreign Wars, BPOE Elks Club, and the American Legion.

Bob loved to fish, hunt, camp in the mountains, and travel. Playing cards, doing crafts, doing puzzles, and walking his dogs were his favorite pastimes. He was a very sociable person and knew no strangers.

He was preceded in death by his wife of 57 years, Verle Korthaus, daughter, Nancy Nicholson; sister, Edith Miller; and parents, Emil and Lenora Korthaus. Memorials may be made to Help for Health Hospice Home in care of Davis Funeral Home, 2203 West Main Street, Riverton, WY 82501.