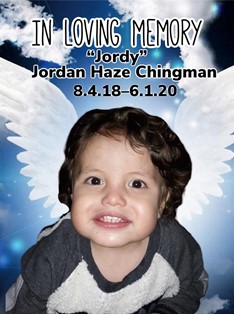 Jordan was born on August 4, 2018 in Sheridan, WY; to Brittney RockAbove and Matthew Chingman.

Jordan was a playful, loving spirit with a love of the outdoors, playing in the swimming pool, exploring, dancing, eating all day, listening to music, hugs, fishing, and terrorizing everybody but mostly his sisters.

He was enrolled in the Northern Arapaho Tribe, he was also Crow, Shoshone, & Meskwaki.