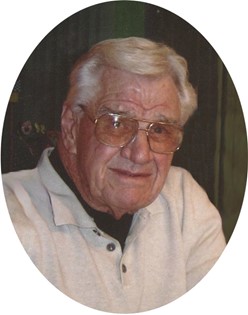 Guestbook 12
Riverton businessman Samuel J. "Sam" Stanbury died on Sunday, Oct. 26, 2008, at the Wyoming Medical Center in Casper. He was 85. Funeral Mass will be at 10 a.m. Friday, Oct. 31, at St. Margaret's Catholic Church in Riverton. The Rev. Fathers Andrew Duncan and Ron Stolcis will officiate.

Interment will follow at Mountain View Cemetery with military honors by the Wyoming National Guard.

Samuel Joseph Stanbury was born in Butte, Mont., on Feb. 2, 1923 the only child of Samuel Leo Stanbury and Pauline Matilda (Pfaff) Stanbury. Both of his parents were the children of immigrants who had gone to Butte in the 1880's when it was the copper mining capital of the nation. His father was of Scottish and French-Canadian ancestry and his mother was German.

The family lived in Butte for several years. Then, when Sam was about three, the Stanburys moved to Bozeman, Mont., where there were better work opportunities. At that time there were a number of small breweries in the area and the elder Mr. Stanbury picked up the contract for delivering beer to the many towns in central Montana. As a young man, Sam helped his father on the beer truck where he began to learn the principles of business.

The elder Mr. Stanbury was described as an avid fly fisherman and he taught his young son the same skill which Sam practiced and cherished throughout his entire life. As a young boy it was not uncommon to find him and his dog wandering the streams and rivers in the Bozeman area with his split bamboo fly rod or his single barrel shotgun during duck season.

He attended Holy Rosary Catholic School for 12 years – grades 1 through 12 and was graduated with a basketball scholarship to Montana State. His small class developed a close association which lasted over the years and Mr. Stanbury remained in contact with several of his classmates since his days in Rosary.

Mr. Stanbury enlisted in the U.S. Navy following the attack on Pearl Harbor and he was sent to San Diego, Calif., for boot camp. From there, he went to Boulder, Colo., to radio school and then to Norwich, Conn., for advance radio school training. His first assignment was out of Miami on sub-chaser 1349, a 110-foot wooden mini-destroyer whose job was to patrol the East Coast for enemy submarines. In 1943, the sub-chaser was loaded on a larger liberty ship and taken across the Atlantic to Liverpool, England, where they then patrolled the English coast, Scotland, and Wales. On June 6, 1944, Mr. Stanbury 's sub-chaser lead the first wave of LCIs – Landing Craft Infantry - on to Omaha Beach during the invasion at Normandy. While Mr. Stanbury escaped harm during the invasion, he had several close times during his time in the Navy.

Mr. Stanbury returned to the United States, via the Queen Mary, in time to attend the funeral of his father. Because the naval war in Europe was winding down, he was reassigned to a mini-aircraft carrier, which had been commissioned for the Pacific Theatre. It was on the voyage to Hawaii that he heard on the ship's radio that an atomic bomb had been dropped on Japan and the war ended shortly thereafter. Mr. Stanbury was discharged and back in Bozeman by that September.

Following the war, Mr. Stanbury carpentered, managed Karst Guest Camp on the Gallatin, and ran a car dealership, boasting of having the only Tucker car franchise in Montana. However he never sold a Tucker because the company ceased production before he could get a car.

In 1955, Vern Hughes, a friend of Mr. Stanbury's, called his attention to fledging uranium mining in the Riverton area. The men came to Riverton and staked successful claims in the Gas Hills mining area.

Later that same year, Mr. Stanbury moved his family from Bozeman to Riverton. He, his wife Veda, three small children, and his mother moved into a small mobile home on North Broadway in the growing town.

The partners developed two mines – the Myrna Lynn named after Sam's daughter and the VeCa, named after their respective wives, Veda and Carol. Mining was primitive and the ore was processed in the Susquehanna Mill, which was located at the site of the current acid plant south of town.

A number of big mining companies had interest in the claims owned by Stanbury and Hughes. After selling those claims Mr. Stanbury opened his Goodyear franchise -- Riverton Tire and Oil -- first on Main Street and finally on South Federal Boulevard. About the same time, he entered into a marketing agreement with the original Sinclair Oil Company to distribute petroleum products and as a result formed a number of related companies - the S. J. Stanbury Company and S and S Oil Company. In later years he entered into numerous other business ventures with members of his family and several long-time employees.

His family said that Mr. Stanbury also enjoyed the "412 Club," planning the next hunting or fishing trip with friends such as Jim Hill, Kirk Cogswell, Marshall Kennedy, Ambrose McCoy, Harry Cosner, Wayne Ross, Gerry Spence, Bill Moffat, and others. As a carry over from his youth, Mr. Stanbury was an avid sportsman. His family said he loved to hunt and fish, liked to shoot trap, fish for steel head in Canada, hunt elk in the Blue Timber on Bear Creek, but most of all fish for the big browns on Bull Lake Creek.

He was also an avid reader -- especially of works dealing with philosophy, politics, and history. He especially admired the writings of Abraham Lincoln and kept a large portrait of Lincoln in his home. He liked Charlie Russell paintings, kippered snacks, salted nut roll candy bars, old four-wheel drive suburbans, his 270 rifle, his collection of Model 12 shotguns, a good fly pole, and especially his family said, he liked to make business deals.

Mr. Stanbury married Veda Louise Spoonemore of Townsend, Mont., in Bozeman in 1947. They were later divorced. Of that union, there were four sons and a daughter. Surviving children are Myrna Lynn Sammons and husband Al, Samuel Joseph Stanbury Jr. and wife Rose, Douglas Leo Stanbury and wife Jane, and Robert James Stanbury and friend Kelly Clark, all of Riverton. Mr. Stanbury married Natalie Budovich of Hudson in August of 1977. Of that union there were a son and a daughter. Surviving are his wife, Natalie Stanbury of Riverton, children Natasha Stanbury Harris and husband Gabe of Lander and Nicholas John Stanbury of Scottsdale, Ariz. Also surviving are 10 grandchildren, eight great grandchildren, and one great-great grandson.

In lieu of flowers, memorials may be made to St. Margaret's Catholic School, in care of the Davis Funeral Home, 2203 West Main, Riverton, WY 82501.