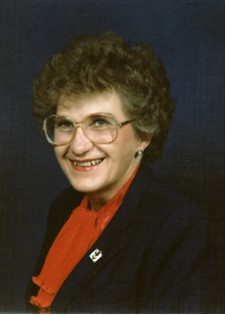 She grew up in Saratoga, attending Platte Valley High School. In the 7th & 8th grade she participated in 4-H sewing, cooking, home improvement, embroidery, and woodworking. She participated in the Junior Class Play and was editor of the high school paper. In band she was drum majorette, played first clarinet in concert band and was past honored queen in Jobs Daughters. She was graduated with the class of 1957.

Ms. Johnson lived in Yellowstone National Park and Gardiner, Mont. with her family until 1945 when they moved to Saratoga. She moved to Laramie in 1957 where she attended the University of Wyoming from 1957 - 1959.

She married Robert Earl Johnson on Sept. 25, 1959 at her parents' home in Saratoga. They had two sons. They later divorced in 1980, but remained close friends. She then worked 16 1/2 years as Administrative Secretary for the Junior and Senior High School. In 1974 she moved to Riverton where she worked for the Riverton Police Department as communication operator for 20 years, and received a Peace Officer of the Year award.

Ms. Johnson was a lifetime member of the Wyoming Peace Officers, active in the D.O.E.S. for 28 years serving as a D.O.E.S. Musician for 23 years and a flag bearer. She was awarded the honor of Musician of the Year, several years, and D.O.E.S. of the Year award in 1989 and 1999.

Ms. Johnson was preceded in death by her parents.