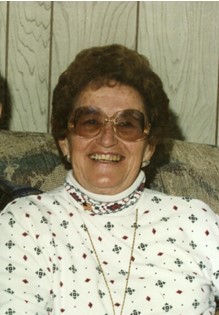 Guestbook 2
Betty Lou Hornecker, whose family roots go back to the pioneer days of Fremont County, died Tuesday morning, Nov. 4, 2008, at the West Park Hospital Long-Term Care Center in Cody. She was 83. Funeral services will be at 10 a.m. Monday, Nov. 10, at the First United Methodist Church of Lander with the Rev. Steve Hermes officiating. Interment will follow at Mount Hope Cemetery in Lander. There will be a viewing from 6 to 8 p.m. Sunday, Nov. 9, at the Davis Funeral Home of Riverton. Betty Lou Iiams was born in Lander on Jan. 1, 1925, the daughter of Roy and Teeny (Schutz) Iiams. She was graduated from Fremont County Vocational High School in Lander with the Class of 1942. On May 2, 1942, she married Albert Hornecker on the Iiams Ranch south of Lander. Mrs. Hornecker lived in rural Lander for the first 71 years of her life. Mr. and Mrs. Hornecker moved to Thermopolis in 1996, to retire. Mr. Hornecker died on Nov. 1, 1996. She remained in Thermopolis for about seven years and then moved to Cody. Mrs. Hornecker was of the Methodist faith She was a lifetime member of the Fremont County Farm Bureau, served on the advisory council for Mountain Bell, was the first woman to serve on the board of directors for the Mountain West Farm Bureau, was a member of the Fremont County Extension Council, a member of nearly two decades of the Fremont County Cowbelles, member of the Fremont County, state, and national Cattlemen's Associations, life member of the Fremont County Pioneer Association, an active adult member of the Wind River Reservation Youth Council and Board, and belonged to the Windmill Homemakers Club. Her family said she enjoyed helping people, doing neighborhood projects, gardening, greeting people with a smile, dancing, actively participating in county, state, and national organizations, hosting large family gatherings and annual family reunions, fishing and hunting, horse pack trips, cooking over an open fire, riding horses, and traveling, including many trips to Las Vegas, Washington, D.C., the Yukon, and Holland. Mrs. Hornecker helped initiate and organize the Fremont County Vocational High School alumni gatherings in Lander. She was a ranch wife on the family's Squaw Creek Ranch from 1942 until its sale in 1961. They then moved to the Reed ranch, and then to their ranch on Mill Creek near Ethete. Mrs. Hornecker had been the agriculture correspondent and daily program announcer for KOVE Radio in Lander and had worked in the extension agents' office for the Fremont County Extension Service at the courthouse in Lander. She is survived by a son, John L. Hornecker and his wife Joyce of Lander; daughter, Christine J. Beers and her husband Gale of Cody; grandchildren, Cody Beers and his wife Robyn of Riverton and Tina Hardesty and her husband Todd of Cody; four great grandchildren, Kyle, Brady, Kayla, and Baylor. She was preceded in death by her husband, Albert Hornecker on Nov. 1, 1996; her parents; a brother, Leroy Iiams, and a sister, Emily Hedges. Memorials may be made to the Hornecker Scholarship Fund, in care of the Davis Funeral Home, 2203 West Main, Riverton WY 82501. On-line obituaries are available and condolences for the family may be made at: thedavisfuneralhome.com Services are under the direction of the Davis Funeral Home of Riverton.