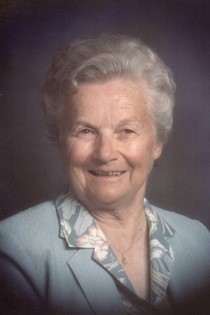 Guestbook 1
Funeral services for Pauline T. Tjomsland of Dubois will be at 10 a.m. on Saturday, Nov. 15, at St. Thomas Episcopal Church in Dubois. Sylvia Crouter will officiate and interment will follow at the Dubois Cemetery. A carry-in dinner will follow at the VFW in Dubois. Mrs. Tjomsland died on Wednesday, Nov. 5, 2008, at the Edgewood Vista Care Center in Missoula, Mont., suffering Alzheimer's and complications from a fall. She was 94 years ago. Pauline T. Watermier was born in Hamill, S.D., on July 20, 1914, the daughter of Lena and Hubert Watermier. She lived on a farm near Winner, S.D., until she was 16 and then moved to Rapid City, S.D., in 1930. She married Cyrus O. "Cy" Tjomsland on Sept. 2, 1934, in Rapid City. Mr. and Mrs. Tjomsland moved to Casper in 1936, then to Dubois in 1949. There the couple, along with her sister, Arlene, and husband Steve Shavlik, purchased the Yellowstone Service and Motel. In 1955, they started the Dubois Electric which they owned and managed until retirement in 1975. In July of 2003, Mrs. Tjomsland moved to Homestead Living in Riverton and in July of 2006, she moved to Edgewood Vista in Missoula, Mont. Kelly Reynolds and Gary Shavlik were her caregivers during the time. Mrs. Tjomsland was a member of St. Thomas Episcopal; Church, a life member of the VFW Auxiliary, a member of the American Legion Auxiliary, a member of the SnowKaters of Dubois, the Sourdoughs, and the High Country Senior Center. Her family said Mrs. Tjomsland was an avid fisherman. She hunted and snowmobiled until she was 85 years old and loved the out-of=doors. Survivors include a nephews, Gary Shavlik and his wife Jan of Dubois; a niece, Kelly Reynolds and husband Mickey of Missoula; a nephew, Steven Marrou and his wife Brandy of Cheyenne; nephews Craig Shavlik of Anchorage, Alaska, and Greg Shavlik of Bozeman, Mont; nieces, Wendy Tosch, Gaylene Huntington, and Tammy McMahon of Fairbanks, Alaska; Jerry Marrou, and many great-great nieces and nephews. She was preceded in death by her husband, Cy, on Feb. 23, 1966; her son, Larry K. Tjomsland on Oct. 4, 1997; her parents; her sister, Arlene on Nov. 5, 1994; her brother, Ralph, and her niece, Dixie Marrou on Nov. 12, 1994. Memorials may be made to the VFW Scholarship Fund or the High Country Senior Citizens in Dubois, or through the Davis Funeral Home, 2203 West Main Riverton, WY 82501. On-line obituaries are available and condolences for the family may be made at: thedavisfuneralhome.com Services are under the direction of the Davis Funeral Home of Riverton.