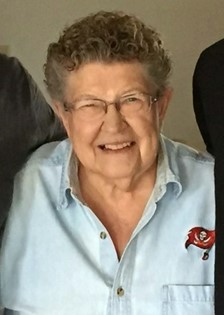 Guestbook 5
Betty Shanafelt, 88, of Riverton passed away at the Wyoming Medical Center in Casper on Thursday, January 28, 2021. Cremation has taken place and a Celebration of Life will be held this summer.

Betty Ann Metzker was born on August 14, 1932 in Hardin, MT to George and Kathryn (Gross) Metzker. She was one of six children and was raised in Roundup, MT, where her father was a coal miner.

She met Loren Ray Shanafelt while he was working Seismograph and she was a ticket girl at the theater. On November 19, 1949 the married in Montana and started their life together. The couple raised four boys.

Betty was baptized at the First Christian Church of Crane, TX.

They moved a lot of different places in Wyoming and Montana for the next several years before moving to Crane, TX on July 24, 1959. While in Texas Loren worked at a gas plant and Betty worked at the local hospital as an X-Ray Assistant. After about 8 years the family moved back to Riverton and lived on 16th Street until 1978 when they moved to Paradise Valley. Loren passed on April 20, 1998. After moving back to Riverton, Betty worked at Woolworth’s for the next 17 years and began cleaning homes in 1984 for the next thirty years.

Betty enjoyed making quilts, knitting, crocheting, and traveling. The family made many trips to Yellowstone and Texas to see family.

She is survived by her two sons, Kirby Shanafelt and his wife, Tammi Jo of Riverton, their children, Ariel, Amy, and Amber, and grandchildren, Delano, Oshua, and Orion; son, Brian Shanafelt of Levelland, TX, his children, Chelsie, Koby, Ashlyn, and Noah, and grandchildren, Keegan, Allie, Jonah, Zane, and Zayda; and her brother, Harvey Metzker of Billings, MT.

She was preceded in death by her parents, George and Kathyrn Metzker; husband of 48 years, Loren Shanafelt; sons, Jerry Ray Shanafelt and Marvin Keith Shanafelt; and sibilings, John Dorothy, Donny, and Bob.