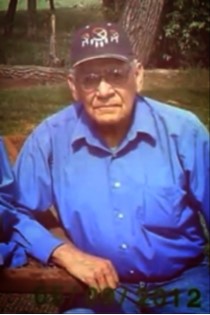 William Patrick Oldman was born on October 7, 1935 in Arapahoe, WY to Jason “Barney” Oldman and Virginia Duran Oldman. He was given the Arapaho name of Rising Star. He grew up in the St. Stephen’s and Arapahoe area and attended school there.

He was baptized into the Catholic faith. He had a strong faith in his Northern Arapaho Ways, Sundance, and the Native American Church.

William served in the U. S. Airforce.

In March of 1960 he married Louise Blake in Lander, WY. They raised their family in the St. Stephen’s and Arapahoe area. She preceded him in death.

William enjoyed going to the casino, Country Music, getting ice cream from town, playing guitar, listening to Native American Church music, and listening to Pow Wow and Sundance songs. Wholeheartedly Buddy enjoyed being surrounded by his grandbabies and great grandbabies. He was a true Family Man.

The family would like to express their sincere heartfelt appreciation to Richard Willow and George Moss for their gift of prayers through our ceremonial ways. And also appreciation to Wind River Hospice Program, Riverton Senior Center – Marilyn, Linda at the Pit Stop, and Martin Spoonhunter for making his burial cross. Thank You.