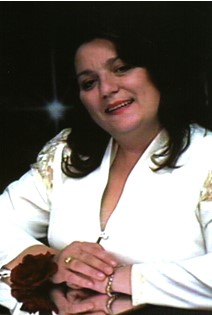 Guestbook 0
Funeral services for Evelyn L. Harshbarger of Arapahoe will be at 2 p.m. Thursday, Dec. 11, at the Davis Funeral Home of Riverton. Cremation will follow. Mrs. Harshbarger died at the home of her sister in Riverton on Sunday, Dec. 7, 2008, at the age of 49. Evelyn Lee McKinney was born on June 19, 1959, in Tacoma, Wash., the daughter of Leonard Bearl McKinney and Nina Victoria (Clarke) McKinney. She spent most of her life in her home state of Washington, coming to Riverton and Arapahoe 10 years ago. Mrs. Harshbarger worked as a cook in restaurants. She was of the Baptist faith, having been baptized at the Hillcrest Baptist Church in Riverton. She served as a chaperone for Fremont Counseling, was involved with the 1838 Rendezvous, enjoyed babysitting, children, her grandchildren, and cats. Her grandchildren called her Grandma Pooh Pooh. Survivors include a son, James Leroy "Bud" Hunter and his wife Kimberley of Billings, Mont.; daughters, Angella Swalling of Washington state, and Eva Marie Harshbarger of Riverton; grandchildren, Nathaniel, P.J., Abby, and Ashley Jo; brothers, Clifford McKinney of Memphis, Tenn., and Jonny McKinney of Tacoma, Wash.; sisters, Ruby "Vicki" Martin of Riverton, Mary Schrock of Lysite, Jackie Douglas of Roberts, Mont.; many nieces and nephews. She was preceded in death by her parents, Leonard and Nina McKinney, and a brother, Eddie Goddard. On-line obituaries are available and condolences for the family may be made at: thedavisfuneralhome.com Services are under the direction of the Davis Funeral Home of Riverton.