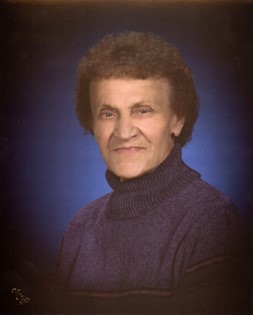 Guestbook 2
Funeral services for Elizabeth "Betty" Botts will be held at 2 p.m. on Saturday, Dec. 13, at St. Margaret's Catholic Church in Riverton with the Rev. Father Andrew Duncan officiating. Interment will follow at Mountain View Cemetery in Riverton. A rosary will be held at 7 p.m. on Friday, Dec. 12, at the Davis Funeral Home of Riverton, with viewing preceding from 5 to 7 p.m. Mrs. Botts died on Wednesday, Dec. 10, 2008, at her home north of Riverton. Elizabeth Ann Appelhans was born in Riverton on Feb. 28, 1924, the daughter of Felix and Mary (Mildenberger) Appelhans. On Jan. 14, 1947, she married Clyde Botts at St. Margaret's Catholic Church in Riverton. She remained as a Riverton resident until her death, within a three-mile radius of her childhood home. Her family said Mrs. Botts enjoyed quilting, reading, gardening, dancing, especially the polka, and spending time with her family, joining them on their travels. She was a lifetime parishioner of St. Margaret's and a member of the Riverton Council of Catholic Women. She is survived by her children, JoAnne Gaynor and her husband John of Las Vegas, Nev., and JoAnne's daughter Brooke Shinsky and her husband David of Walnut Creek, Calif.; Tom Botts and his wife Shelley of The Netherlands, and their three children, Jaime, Ryan and Michaela; and Beverly Stockdale and her husband Terry of Henderson, Nev., and their two children Megan and Melissa. She was preceded in death by her parents; husband, Clyde; brothers, Joe and Frank Appelhans; sister, Helen; brothers-in-law, Harold Heberlein, George Doherty, Al Reuber, and Ed Becker. Memorials may be made to the St. Margaret's Catholic Church or to a charity of the donor's choice in care of the Davis Funeral Home, 2203 West Main, Riverton, WY 82501. On-line obituaries are available and condolences for the family may be made at: thedavisfuneralhome.com Services are under the direction of the Davis Funeral Home of Riverton.