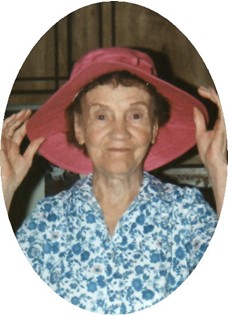 Guestbook 2
Farris Alberta Evans of Riverton died at Westward Heights Nursing Home in Lander on Monday, Dec. 15, 2008, at the age of 83. Funeral services will be at 10:00 am on Friday, Dec. 19, 2008 at the Davis Funeral Home. A Viewing will preceded the service from 9:00 – 10:00 a.m. Interment will follow at Mountain View Cemetery in Riverton. Farris Alberta Parker was born in Harrison, Neb., on Sept. 27, 1925, the daughter of Ernest and Marie (Martin) Parker. She moved to Riverton from Nebraska in 1941. On Jan. 21, 1940, she married Troy Evans in Lander. He preceded her in death in 1986. Her husband worked in the oil fields, so the family moved many times. Mrs. Evans was of the Baptist faith. Her family said she enjoyed watching television, going to rodeos, and enjoyed country living near Kinnear where she could work with livestock. For 20 years, she worked as custodian at the Wind River School at Pavillion. Survivors include a granddaughter, Kandi Wenzel of Hampton, Ga.; brothers, Henry "Hank" Parker of Farmington, N.M., and Marvin Parker of Norfolk, Virginia; sisters, Loretta Hood of Nebraska and Shirley Nickell of Dodge City, Kan. She was preceded in death by her parents; her husband, Troy, and a son, Kenneth, in 2005. Memorials in her name may be made for cancer research in care of the Davis Funeral Home, 2203 West Main Street, Riverton, WY 82501. On-line obituaries are available and condolences for the family may be made at: thedavisfuneralhome.com Services are under the direction of the Davis Funeral Home of Riverton.