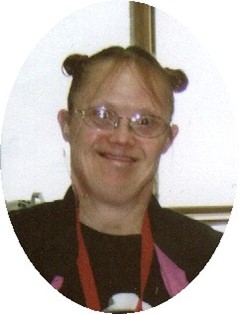 Guestbook 0
Ruth Ann Saltz died at her Riverton home with friends on Tuesday, Dec. 30, 2008, after a long battle with Alzheimer's. She was 56.

Funeral services will be at 10 a.m. Wednesday, Jan. 7, at the Davis Funeral Home, with lunch provided by Community Entry Services at the Johnson Center. Interment will follow with her family at the Highland Cemetery in Casper.

Ruth Ann Saltz was born on July 7, 1952, to Cecil and Grace (Averill) Saltz in Casper. She was the baby of the family and had five brothers -- Robert, Frank, Fred, Jerold, and Mike. She grew up with her family in Casper and friends said she always spoke fondly about her memories of them.

Ms. Saltz began receiving services from Community Entry Services in 1979. During that time, she had lived and worked in Jackson, Lander, and Riverton.

Her friends said Ms. Saltz was a fan of WWE wrestling, enjoying going to concerts, especially country/Western music, and had a way of dancing that made everyone laugh. They said she enjoyed going out to eat, going to the movies, and spending time with friends with whom she had a great sense of humor and enjoyed teasing.