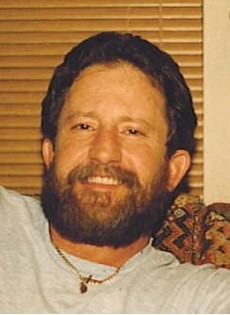 Guestbook 1
Forrest L. "Tree" Henman died at his home in Lander on Saturday, Jan. 24, 2009, after a lengthy battle with cancer. He was 55. Cremation has taken place and services will be held at a later date. Forrest Lee Henman was born in Billings, Mont., on June 23, 1953, the son of Robert "Salty" and Gloria Jessie Nease-Henman. Mr. Henman served with the U.S. military during the Vietnam War. After returning from military service, he worked in the family business, Salty and Sons, delivering specialty foods around Wyoming. He married Kathy Nelson. They had one son and were later divorced. Mr. Henman worked in underground mining at Jeffrey City and later started working in the oil fields until suffering a back injury which disabled him. In 1992, he met and married Kim Nolde of Lander. His family, said Mr. Henman enjoyed making walking sticks, reading, fishing and camping, especially with his grandsons, Noah and Conner. Mr. Henman is survived by his wife, Kim Henman of Lander; step-son, Jacob Sorrels of Lander; son, Shane Henman of Colorado; grandsons, Noah and Conner of Colorado; brothers, Robert Henman and his wife Karen of Colorado, Chuck Henman of Riverton, Larry Henman and his wife Sharon of Nevada; sister, Justine of Cheyenne; adopted mother and sister, Mary Alice and Lisa Hencock, and numerous nieces and nephews. He was preceded in death by his father, Salty Henman; mother, Gloria Huset; step-mother, Deloris Henman; a half-brother, Bryan Henman, and half-sister, Terry. Memorials may be made to the Pet Connection or Little Wind Hospice, in care of the Davis Funeral Home, 2203 West Main, Riverton, WY 82501. On-line obituaries are available and condolences for the family may be made at: thedavisfuneralhome.com Arrangements are under the direction of the Davis Funeral Home of Riverton.