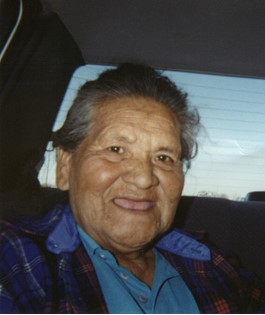 Guestbook 1
Funeral Mass for June "Ina" Blackfeet of Arapahoe will be at 10 a.m. Monday, Feb. 9, at St. Stephen's Catholic Church. Interment will follow at the Arapaho Catholic Cemetery at St. Stephen's. There will be a rosary at 7 p.m. Saturday, Feb. 7, at the Davis Funeral Home of Riverton. A second rosary will be at 7 p.m. on Sunday, Feb. 8, at Great Plains Hall at Arapahoe. A wake will follow at her residence, 328 Great Plains at Arapahoe.

June Potter was born at Arapahoe on June 23, 1935, the daughter of Laura Potter Monroe. She attended school at St. Stephen's.

She was a homemaker and dairy worker who married Thomas Francis Blackfeet.

She had lived her lifetime on the Wind River Indian Reservation.

Mrs. Blackfeet was a member of the Catholic faith and the Native American Church.

Her family said she enjoyed hand games, bingo, sewing, spending time with her grandchildren and great grandchildren, fishing, camping at pow-wows and sundances, having cookouts with her family.