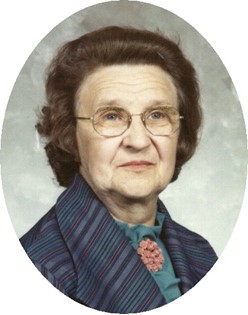 Guestbook 3
Funeral services for Elizabeth "Beth" Poffenroth of Riverton will be at 10 a.m. Tuesday, March 3, at the Trinity Lutheran Church in Riverton. The Rev. David Magruder will officiate. Burial will be at Mountain View Cemetery in Riverton. Viewing will be from 7 to 8 p.m. Monday, March 2, at the Davis Funeral Home of Riverton. Mrs. Poffenroth died on Thursday, Feb. 26, 2009, at Wind River Healthcare in Riverton. She was 98. Elizabeth Befus was born on April 5, 1910, in Boulder, Colo., the daughter of Alexander Befus and Mary (Poffenroth) Befus. She grew up in Colorado and attended the Boulder public schools. On, Jan 3, 1933, she married Phillip Poffenroth in Longmont, Colo. The family moved to Riverton in 1937. Mr. Poffenroth died in 1960. At that time, she returned to Denver for employment. After retirement in 1999, she returned to Riverton. Mrs. Poffenroth was a self-employed domestic housekeeper and caregiver. Her family said she enjoyed sewing, gardening, and homemaking. Mrs. Poffenroth was of the Lutheran faith. Survivors include a son, Raymond Poffenroth of Riverton; daughter, Evelyn Natzke of Denver; seven grandchildren, Terri and Larry Middagh of Helena, Mont., Debbie and Steve Belville of Riverton, Gary Poffenroth of Denver, Mike and Lisa Poffenroth of Idaho Falls, Idaho, Ron and Jolene Poffenroth of Riverton, Larry and Valerie Natzke of Pine, Colo., and Lori and David Dreyer of Fredricksburg, Texas; 15 great grandchildren, and a brother, Sam Befus of Longmont, Colo. She was preceded in death by her parents, Alex and Mary Befus; her husband, Phillip Poffenroth in 1960; brothers, Henry Befus, Jacob Befus, Peter Befus, Alex Befus, Jr., Albert Befus, and Adam Befus; sister, Katherine Blumenshine. Memorials may be made to Trinity Lutheran Church, in care of the Davis Funeral Home, 2203 West Main, Riverton, WY 82501. On-line obituaries are available and condolences for the family may be made at: thedavisfuneralhome.com Services are under the direction of the Davis Funeral Home of Riverton.