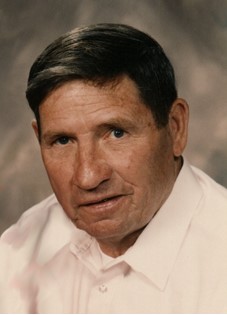 Guestbook 4
Lonnie L. Pigg died at his home in Riverton early Wednesday morning, April 22, 2009, after a short battle with cancer. He was 83. Funeral services will be at 2 p.m. Friday, April 24, at the Davis Funeral Home of Riverton with interment to follow at Mountain View Cemetery in Riverton. There will be a viewing from 5 to 7 p.m. Thursday, April 23, at the funeral home. Lonnie Leon Pigg was born in Durant, Okla., on March 7, 1926, one of 16 children born to John Luther Pigg and Rena Irene (Buttler) Pigg. He attended schools in the Silo School District of Oklahoma, growing up on a farm at Durant. He was baptized into the Baptist faith. During World War II, Mr. Pigg was in Bakersfield, Calif., working in the shipyards. When the war ended, he went to Texas and began working in the oil field. His first job was in Dumas, Texas. Moving with the oilfields, he was in Casper for a short time and later moved to Montana. While in Montana, he married Phyllis Ann Kimball on Nov. 15, 1952, in Sidney. The couple moved to many Rocky Mountain states, settling in Riverton in 1954. He worked in the oil field until 1961 when he took a job in the Gas Hills uranium mines as a scraper operator and heavy equipment operator and mechanic. He returned to the oil fields and suffered an injury in 1982 which lead to many surgeries and forced early retirement at the age of 57. His family said for the remainder of his life, Mr. Pigg enjoyed his family and friends. They said he enjoyed his yard, fishing, and setting on the back porch, watching a day go by. Mr. Pigg was a driller in the oil fields. He had started in the industry as a floor hand and worked his way up as driller and tool pusher, working in Wyoming, Colorado, Utah, Montana, and North Dakota. As a heavy equipment operator and mechanic, he had worked for Lucky Mc, Federal-American Partners, and Macco. His family said he loved the oilfields and was also adept at fixing things. Survivors include his wife, Phyllis of Riverton; sons, Steven Pigg and wife Roberta, Douglas Pigg and wife Nancy, and James Pigg and wife Cheryl, all of Riverton; a daughter, Nancy Wempen and husband Les of Riverton; eight grandchildren, Andy Wempen, Brittney Pigg, Shellby Pigg, Cody Pigg, Tonia Pigg, Christopher Pigg, Jeff Pigg and Janelle Pigg Smith; eight great grandchildren; brothers, Cleo Pigg and his wife Margaret, and Junior Pigg and his wife Judy of Durant, Okla.; sisters, Annie Hartigan and Joyce Pigg, both of Durant, and Lois Hodges and her husband Ralph and Mildred Newkirk, all of Lubbock, Texas; two sisters-in-law, Dorothy Stoner and husband Jerry of Polson, Mont., and Marjorie Valsvig and husband Noble of Spokane, Wash.; numerous nieces and nephews. He was preceded in death by his grandparents, parents; brothers, Elvis, Tommy, Joe, Johnnie, Virgil, and two infant brothers; sisters, Dorothy and Bessie; a granddaughter, Michelle Wempen Duty; a brother-in-law, Wayne Kimball. On-line obituaries are available and condolences for the family may be made at: thedavisfuneralhome.com Services are under the direction of the Davis Funeral Home of Riverton.