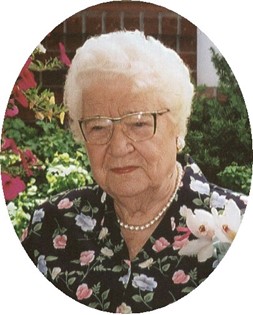 Verna was born September 19, 1908 in Midland, South Dakota the daughter of Charles Logan and Jessamine (Richey) Walter. At the age of five they moved to Richey, MT where she attended school and graduated from Richey High School. She then attended college in Dillon, MT and received her teaching certificate. She taught elementary school for 12 years in McCone, Dawson and Richland counties. She then became office manager for the Richland County ASC office and retired from that position 13 years later.

She married Lon E. Frost in Lewistown, MT in 1932. They farmed on the Frost homestead in the Elmdale community of Richland County until 1936 when they moved to Sidney and Lon became under sheriff and then Justice of the Peace.

Verna was active throughout her life in Sidney at Lonsdale Methodist Church teaching Sunday school and serving as church secretary. She was also active in PEO, Eastern Star, Rainbow mother advisor and Demolay mother. She enjoyed ceramic classes and spent each day of her life looking for the fun, beauty and excitement the world had to offer.

After her husband passed away in 1975, she married Russell Danielson and moved to Billings, MT. They later divorced.

She was preceded in death by her husband, mother, father and two brothers.