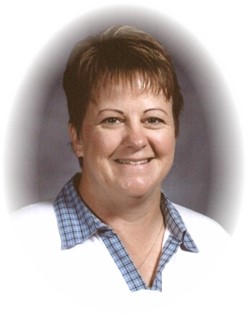 Guestbook 23
Funeral Mass for Fran Galey of Riverton will be at 11 a.m. on Saturday, May 2, at St. Margaret's Parish Hall in Riverton with the Rev. Father Andrew Duncan officiating.

A rosary will be recited at 7 p.m. Friday, May 1, at St. Margaret's Catholic Church in Riverton.

The family moved to Riverton where she attended schools and was graduated from Riverton High School in 1980. She attended Chadron State College in Nebraska, and earned degrees in science and education.

On June 16, 1984, she married Jay Galey in Crawford, Neb. Three children were born to that union.

Mrs. Galey's 24-year teaching career began in 1986, teaching science for six years in Spalding, Neb. Then she taught chemistry and physics in Ord, Neb., for 13 years.

In 2005, the Galey family moved to Riverton where she taught science in the middle school until she became ill.

An avid supporter of youth baseball, Mrs. Galey served on the boards of Little League and Babe Ruth baseball.

Her family said Mrs. Galey's life centered around her family and her students. She enjoyed camping, photography, watching school sporting events, and family gatherings. They said she delighted in preparing students to compete in the Science Olympiad each year, having a special talent for helping her students understand and have fun with science.

Mrs. Galey is survived by her husband of 25 years, Jay A. Galey of Riverton; daughters, Jaycy and Kelsey; a son, Thomas "T.J."; parents, Larry and Pat Dowse of Riverton; a sister, Laurie Penor and husband Chris and their daughters Patricia and Christa of Bozeman, Mont.; a brother, James Dowse and his wife Jeanna of Ganado, Ariz.; aunts, Marguerite Baugh and husband Gordon of Goodrich, Colo., Coleen Dunn and husband Terry of Riverton; great aunt, Mary Sisson of Riverton; several cousins, and extended family in Nebraska.

She was preceded in death by her grandparents, Claud and Lillian Dowse and James and Agnes Dean.