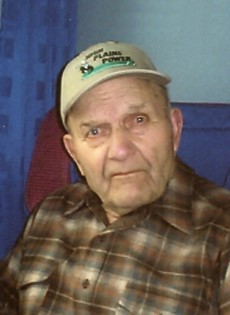 Guestbook 3
Jerry James Majdic, a life-long Fremont County rancher, passed away on May 30, 2009 at the Help for Health Hospice Home.

Jerry was born on May 4, 1923 in a pioneer shack outside of Hudson, Wyoming. Humorously, Jerry liked to tell a story that he was born in a shack that later became the family chicken coop.

Jerry graduated from Fremont County Vocational High School in 1943 and shortly thereafter he was drafted in the US Army to fight in WWII. Jerry joined General Patton’s 3rd Army, 11th Armored Division, and fought in the European Theater in a Sherman Tank. He participated in the defense of Bastogne Belgium, capture of the Walther firearm factory, liberation of the Mauthausen concentration camp, and the rescue of the Royal Lippizaner Stallions from advancing Russian Troops.

After the War, Jerry and his brother John bought a ranch in Sinks Canyon and later the family farm outside of Hudson. They farmed together for over fifty years. Jerry enjoyed a quiet life of hard work and spending time with his family. He was especially proud that he drove the ALCAN Highway shortly after its opening and that he protested in Washington, DC for farmer’s rights.

In 1967 Jerry married Carmen Trujillo and later had two sons, Jerry Jr. and Tom. Jerry was proud that both of his sons graduated from the University of Wyoming with Honors.

A few years before his death, Jerry toured the European battlefields that he fought in during his youth. Jerry enjoyed recanting the trip to anyone that was interested. His family remembers Jerry being a caring father who enjoyed spirited discussions and a hard worker who could fix anything.

Jerry was a member of the 11th Armored Division Association, Hudson VFW, and Church of the Ascension.

Jerry was preceded in death by his parents, John and Jenny, and his siblings: Jenny, John, Julius, Buddy, and Jack.

He is survived by his wife, Carmen, sons Jerry Jr. and wife Brenda of Riverton, and Tom and wife Van of Sandy, Utah. Also numerous nieces, nephews and in-laws.

Memorials in Jerry’s name may be made to the Help for Health Hospice Home in care of Davis Funeral Home.

In memory of the simple country spirit that Jerry represented, the family asks that those who attend his funeral wear casual clothing. Luncheon will be served immediately following the memorial service.