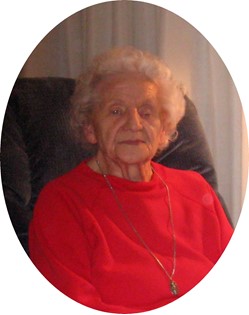 Guestbook 0
Funeral services for Adeline N. Hebert of Lander will be at 10 a.m. Tuesday, June 16, at Holy Rosary Catholic Church in Lander. The Rev. Father Dave Erickson will officiate and interment will follow at Mount Hope Cemetery in Lander. There will be a rosary at 7 p.m. Monday, June 15, at Holy Rosary Church, with a viewing at that time. Mrs. Hebert died at Westward Heights Care Center on Friday, June 12, 2009. She was 86. Adeline Nykiel was born in Chicago, Ill., on June 5, 1923, the daughter of John and Angeline (Busczyk) Nykiel. She was a social worker, having received her Bachelor's degree in philosophy from Loyola University in 1945 and her Master's degree in 1947. She worked as a social worker for more than 40 years. She worked at the Chicago State Hospital, VA Hospital, Naval Hospital, and Welfare Department in Illinois. She did clinical work and had a private practice in her home at one time. On Sept. 2, 1950, she married Wilfred Paul Hebert in Evergreen Park, Ill. The couple moved to Colorado Springs, Colo., in 1963. Mr. Hebert died there in 1972. She moved to Lander in 1991. Mrs. Hebert was a member of Holy Redeemer Church in Illinois and of Holy Rosary Catholic Church in Lander. Her family said Mrs. Hebert was very active in the Republican party and a member of the National Association of Social Workers, and ACSW. The family said she liked golfing, crocheting, knitting, and embroidery. They said she especially liked decorating her house for Christmas. Survivors include several cousins, including Jim and Joan Peters of Lander, and several other cousins out-of-state; a sister, Millie S. Scripp of Lander and close friends, Ben Weeks and Jeanne Lee. She was preceded in death by her mother and father; husband, Paul Hebert; a nephews, John Scripp; brother-in-law, Jack Scripp. Memorials may be made to the Wyoming Catholic College, in care of the Davis Funeral Home, 2203 West Main, Riverton, WY 82501. On-line obituaries are available and condolences for the family may be made at: thedavisfuneralhome.com Services are under the direction of the Davis Funeral Home of Riverton.