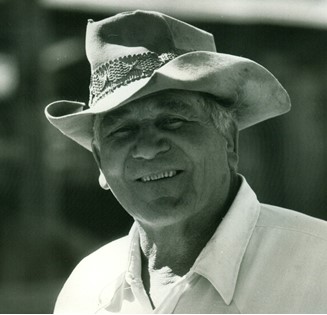 Guestbook 3
C. Larry Miller of the Cross Mill Iron Ranch out of Crowheart died on Saturday morning, June 20, 2009, at the Help for Health Hospice Home in Riverton. He was 89.

Funeral services will be at 10 a.m. Wednesday, June 24, at Mt. Calvary Lutheran Church in Dubois with Pastor Fred Schroeder officiating. Interment will be in the Dubois Cemetery.

Cloyd Larry Miller was born on the family ranch at Crowheart on April 26, 1920. He was the son of Cloyd Lester Miller and Sarah Ellen (Smith) Miller.

He was graduated from Fremont County Vocational High School in Lander and received his Bachelor of Science degree in animal husbandry from Colorado State University.

In high school, he was an all-state football player for Lander and for Riverton and at CSU he was twice all-conference in football and three times all-conference in wrestling. He captained the football team, made All-American wrestler, and was named the Outstanding Senior Athlete at CSU.

He served with the U.S. Army in the South Pacific during World War II.

On May 4, 1947, he married Constance Rose Allison in Jackson, and they settled in Crowheart.

Mr. Miller was a life-long resident of Crowheart, working as a self-employed rancher and outfitter, and operating the Cross Mill Iron Ranch with his wife in the Burris area for over 60 years.

His family said he enjoyed hunting, horses, rodeo, and cattle.

Mr. Miller was of the Lutheran faith.

He was preceded in death by his wife; his parents; brother, Fremont Miller, and sister, May Ernestine Whisenant.