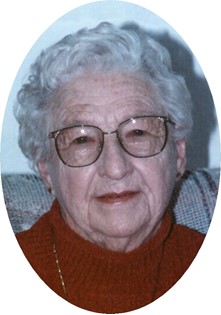 Guestbook 0
A Celebration of Life service for Fern K. Davidson of Lander will be held at 10:30 a.m. Thursday, June 25, 2009 at the First United Methodist Church of Lander.

Cremation has taken place and Mrs. Davidson’s cremains will be buried next to her husband at Lakeview Cemetery in Cheyenne at a later date.

Mrs. Davidson died Wednesday, June 10, 2009 at the Help for Health Hospice Home in Riverton. She was 94 years old.

Fern Katherine Johnson was born to Louis Andrew Johnson and Ruth Naoma (Becker) Johnson on October 3, 1914 on the family ranch in Terhune, Wyo. She attended the Johnson school on the ranch and was graduated from Hulett High School in 1933. She received her BA in education from the Black Hills State College in 1962.

She lived at the Crook County ranch for 47 years, in Veteran, Wyo. for 27 years, Cheyenne for 8 years and Lander for 12 years.

Mrs. Davidson was a teacher in Wyoming for 39 years; 19 of those years were in rural schools in Crook County, including many years at the Johnson school she attended as a child. She then spent 20 years as a third grade teacher in Veteran and Yoder in Goshen County.

She and her husband raised their daughters on the ranch where she grew up. They worked together, including riding horses, working cattle and sheep, fencing and putting up hay.

She was preceded in death by her parents; her loving husband Everett Davidson; a brother John Johnson; sisters Allegra Lee and Mable Wright; son-in-law Leslie Haas.

Memorial donations may be made to the Lander Senior Center, Help for Health Hospice Home, or the Hulett Civic Center, in care of the Davis Funeral Home, 2203 W. Main, Riverton, WY 82501.