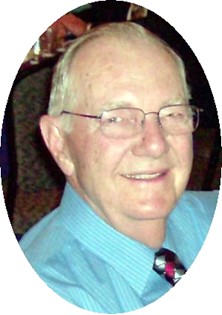 A celebration of life will be held at 1:00 p.m. on Thursday, July 30, at Covenant Presbyterian Church, 975 Fremont, in Lander with Pastor Scott MacNaughton officiating.

He served with the military for 6-1/2 years, beginning as a communication specialist in Alaska until 1959 and ending his tour of duty with the rank of Staff Sergeant, serving as crew chief on a KC135 tanker at Fairchild Air Force Base in Spokane, Wash.

After discharge, Mr. Thompson traveled the United States, working in the private sector. He transferred with Mid-Continent Supply to Wyoming in 1964 where he met and married Myra Ellen Berg in Casper on July 15, 1965.

Mr. Thompson was employed by Kobe, Inc., between 1965 and 1971 in Texas, Wyoming, and California. In 1972, he began working in electronic manufacturing with Mepco/Electra in Mineral Wells, Texas. In 1981, he was hired by West Texas Linen Company in Abilene, Texas, as production manager and later as general manager. In 1987, he was employed as a regional manager for the Todd Uniform Corporation in St. Louis, Mo.

In 1994, Mr. and Mrs. Thompson moved to Lander and owned and operated the Kinnear convenience store until their retirement in 2005. They spent their retirement years traveling to Missouri to see their grandchildren and to Arizona for the winter months. The family said Mr. Thompson especially enjoyed the summer vacations his grandchildren spent in Lander.

Mr. Thompson was preceded in death by his daughter, Pam Doerge in 1994; his mother, Zelma in 2000 and father, L.E. in 2003; sisters-in-law, Lavern Thompson and Marsha White; brother-in-law, Ron Stewart, and nephew, Aaron Berg.