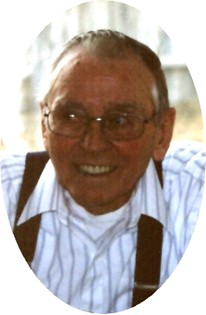 Guestbook 2
Funeral services for George W. Wempen of Riverton will be at 10 a.m. Tuesday, July 28, at the Davis Funeral Home with Pastor Aaron Justice of Faith Fellowship Church of God officiating. Interment will be at Mountain View Cemetery in Riverton. Mr. Wempen died on Thursday, July 23, 2009, at the Wyoming Medical Central in Casper. He was 82. George William Wempen was born on Feb. 19, 1927, in Miller, Neb., the son of John F. and Tolena (Shipper) Wempen. He had five brothers and six sisters, of whom he was the last surviving sibling. He had moved from Nebraska to Wyoming at the age of eight when his father homesteaded at Pavillion. He attended school at Pavillion. He married Betty White in Billings, Mont., on June 22, 1948. Mr. Wempen worked in construction as a heavy equipment operator in New Mexico, California, Oregon, and Wyoming. Moving back to Pavillion, he worked for the irrigation district and farmed. Mr. Wempen owned and operated a service station and café in Pavillion for several years. He also worked for the Fremont County Road Department. His family said Mr. Wempen enjoyed raising Arabian horses, fishing with his family, and going on scenic drives. Survivors include his daughters Sheryll Meade and husband Mike of Pavillion, Cindy Huelle and husband Jerry of Pavillion, Eileen Owens and husband Bill of Riverton; son, Ron Wempen and wife Lauri of Riverton; eight grandchildren, and 13 great grandchildren. He was preceded in death by his parents; brothers, Ed, Fred, Art, John, Bob; sisters, Margaret, Mary, Louise, Elfreda, and Tracy, and wife, Betty. Memorials may be made to the Wyoming Pioneer Home, where Mr. Wempen made his most recent home, in care of the Davis Funeral Home of Riverton, 2203 West Main, Riverton, WY 82501. On-line obituaries are available and condolences for the family may be made at: thedavisfuneralhome.com Arrangements are under the direction of the Davis Funeral Home of Riverton.