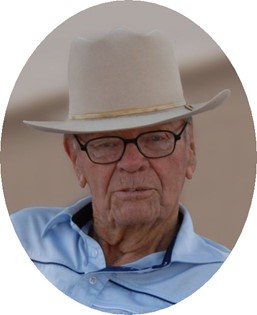 Guestbook 1
Memorial services for George M. “Danny” Danielson of Lander will be at 10 a.m. on Monday, August 10th, at the Bethel Lutheran Church in Lander. Pastor Fred Schroeder will officiate.

Inurnment will follow at Mount Hope Cemetery in Lander.

Mr. Danielson died at his daughter’s home on Thursday night, July 30, 2009, at the age of 90 after an extended illness.

George Morris Danielson was born in Brush, Colo., on Sept. 5, 1918, the son of George and Nora M. (Hanson) Danielson. He grew up and attended school in Brush. He played high school football and graduated in 1936. He received a Bachelor of Science degree from Colorado State University in 1942.

On Oct. 1, 1946, he married Helen Katherine Milnor at her sister’s home near Byers, Colo.

After retirement Mr. Danielson worked for two years for the Near East Foundation in Lesotho, Africa. Then the couple traveled all over the world, making their winter home in Mesa, Arizona, and their summer home in Lander.

Survivors include his wife, Helen of 62 years; son, Scott Danielson and his wife Kay of Mesa, Ariz.; daughter, Lynne Reitz and husband John of Lander; step-grandchildren, Kristen Reitz-Green and husband Vince of Vashon, Wash, and Kurt Reitz and wife Nicole of Woodland Park, CO, and a sister, Betty Blanchard of Lakewood, Colo.

He was preceded in death by brothers, Ivan Danielson and Robert Danielson, and a sister, Mary Gillham, all of Colorado.