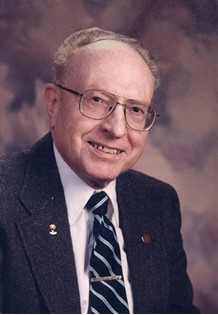 Funeral services will be at 2 p.m. Monday, Sept. 28, at the Davis Funeral Home of Riverton, with Air National Guard Chaplain Wade Jensen officiating. Ceremonial honors will be conducted by Riverton Lodge No. 1693 B.P.O. Elks.

Military honors by the Riverton Veterans Services Organizations will follow at Mountain View Cemetery in Riverton.

A memorial service was held Wednesday, September 23, 2009 at Kline Funeral Chapel in Belle Fourche with Deacon Ray Klein officiating. Gerald Kenneth Jensen was born in Riverton on March 21, 1929, the son of Chris and Elvine Marie (Hansen) Jensen. He was graduated from Riverton High School and attended a year of higher education at Dana College in Blair, Neb.

He enlisted in the United States Army on January 10, 1951 and served his basic training with the Signal Corps in Sacramento, Calif., and was later stationed at Camp Gordon, Georgia, and in Alaska. He was honorably discharged on January 9, 1953.

Following military service, Mr. Jensen attended a year at Casper College and then went to the University of Wyoming where he earned his Bachelor's degree.

In Riverton, Mr. Jensen pursued a career in insurance and real estate, owning the Jensen Insurance Agency until his retirement. Through his involvement with the Independent Insurance Agencies of America he traveled to many different states.

With the exception of his military duty, Mr. Jensen made Riverton his primary home until Sept. 1, 2005, when he moved to Belle Fourche to be closer to his brother and family.

The family said he enjoyed playing pinochle and the trips to the family cabin at Shade Hill. He also enjoyed spending time at the Belle Fourche Senior Center.

Memorial donations may be made to the Wyoming Elks State Trust Youth Project, in care of Davis Funeral Home, 2203 W. Main, Riverton, WY 82501.

South Dakota services are under the direction of Kline Funeral Chapel in Bell Fourche.