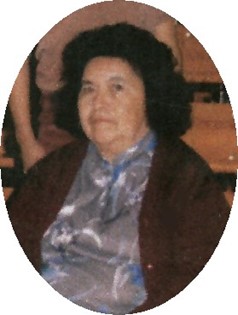 Funeral services will be conducted at 2:00 p.m. Friday, October 9, 2009 at the family home, 8662 Hwy 26, Crowheart, with Pastor Don Nimeck officiating. Burial will follow at Sacajawea Cemetery.

Ophelia Virginia Crispin was born at Ethete on October 10, 1929, the daughter of Henry Crispin and Susie (Armajo) Crispin.

She spent 55 years in Crowheart, and a few years in Colorado Springs, Colo., while her husband was in the Veterans’ Hospital there.

Mrs. Pogue was of the Lutheran faith, attending the Wind River Lutheran Church.

Mrs. Pogue was a member of the Richard Pogue Post #81 Auxiliary, and the Yellowcalf Memorial Club.

The family said she loved the mountains, ranching and her cows, carried the sacred pipe for the Arapaho Sundance, enjoyed her neighbors in Crowheart, getting wood, beadwork, crocheting, making quilts and knickknacks. They said most of all she loved her family.

Services are under the direction of the Davis Funeral Home of Riverton. She was a member of the Richard Pogue Post #81 Auxiliary, and the Yellowcalf Memorial Club.