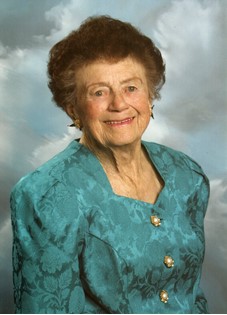 Guestbook 5
A. Myrle Blomberg of Riverton died at her home Thursday morning, Oct. 8, 2009, at the age of 92. Funeral services will be at 10 a.m. on Monday, Oct. 12, at the Davis Funeral Home of Riverton with Pastor Paul Morrison officiating. Interment will follow at Mountain View Cemetery in Riverton. There will be a viewing from 6 to 8 p.m. on Sunday, Oct. 11, at the funeral home and for an hour preceding the 10 a.m. service on Monday. Anna Myrle Sneed was born on Aug. 22, 1917, in Madison, S.D., the daughter of Benjamin Franklin Sneed and Iva Jane (Lewis) Sneed. She married Homer Harold Blomberg on Nov. 4, 1939, in Riverton. Mrs. Blomberg was a farmer, cook, and caretaker. She had worked at the Arapahoe School, at the Grass Valley Convalescent Center in Grass Valley, Calif., and then at the Wyoming State Training School in Lander until 1985. Her family said Mrs. Blomberg enjoyed gardening, milking cows, cooking, farming, and dancing. She was of the Episcopal faith. Mrs. Blomberg had received her 40-year pin from the Arapahoe Homemakers, was a member of the Grange, VFW Auxiliary, and active in the Fremont County Fair. She came to Riverton in 1932, finishing high school here. She lived on the same place on Rendezvous Road since 1945, but spent seven years, 1966-1973, in Grass Valley, Calif. She returned to the family farm in 1973. Survivors include son, Homer Harold Blomberg, Jr., and his wife Martha of El Segundo, Calif.; daughters, Carol Ann Lynch of Riverton and husband Pat of Riverton, Patsy J. Watt of Riverton, and Marilyn S. Hilzner of Greeley, Colo; a step-son, Chris Wayne and wife Joan of Northglenn, Colo.; daughter-in-law, Josie Blomberg of New Mexico; 17 grandchildren, numerous great grandchildren, and nine great-great grandchildren; a sister-in-law, Jody Beidler of Temecula, Calif. She was preceded in death by her husband, Homer; her parents; companion, Roy Dunn; brothers, Verle Sneed, Kenny Sneed; aunt and uncle, Ira and Ida Woodward, and other family members. Memorials may be made to a charity of the donor's choice. On-line obituaries are available and condolences for the family may be made at: thedavisfuneralhome.com Services are under the direction of the Davis Funeral Home of Riverton.