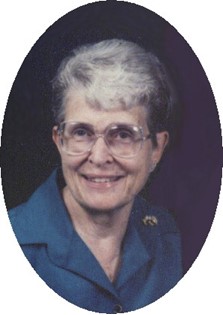 Guestbook 8
Funeral services for Ruth D. Hughes of Riverton will be at 2 p.m. Saturday, Nov. 14, at St. James Episcopal Church of Riverton. Rev. Linda Wilson and Rev. Tommy Means will officiate. Interment will be at Mountain View Cemetery in Riverton. Viewing will be one hour prior to the service at the church. Mrs. Hughes died at Wind River Healthcare in Riverton Tuesday evening, Nov. 10, 2009. She was 83. Ruth Darlene Lauer was born on Dec. 11, 1925, in D Township, Seward County, Neb., near Gresham, the daughter of Fred H. and Stella Rea (Jones) Lauer. The family lived on her Grandmother Lauer's farm and she attended school at District 44, Hornberg School. The family recounts that her mother held her back one-year so that she and her sister Chelsea could start school at the same time. In September of 1936, when they were in the fifth grade, the family moved to Riverton. The girls attended school in Riverton and graduated with the Class of 1944. Early in her life, she started doing housework for her aunt, Mary Piner, who had a boarding house. Later, she did housework for Meta Barnes Sullivan, Viola Hill, and the Jay Ekman family. In 1943, she went to work for Frank and Leona Hiber in the Pioneer Drug Store. She worked there until September of 1950 when she went to work for the Telephone Company. On June 25, 1950, she married Walter Hughes at the Church of the Transfiguration in Moose, Wy. She continued to work for the Telephone Company and Mr. Hughes worked for Amoco. They both retired in 1980. The couple lived on their farm on the Honor Farm Road from 1967 until they moved to Homestead Assisted Living in May of 2007. Mrs. Hughes was active in the St. James Episcopal Church Altar Guild and the Daughters of the King. She was a charter member of the Fremont Chapter of the National Society of the Daughters of the American Revolution and a 60-plus year member of the Riverton Rebekah Lodge 25. She was a member of the Telephone Pioneers Her family said Mrs. Hughes enjoyed traveling and genealogy. She is survived by a sister, Chelsea Downey and husband Dale of Loveland, Colo.; brother-in-law; Curt Hughes and wife Donna of Thermopolis; sister in law; Margaret Lauer of Springfield, Virginia: nephews, Harold and Steve Downey, John Lauer; a niece, Armilda Lauer, and close friends, Shirley Mace and her husband Dorcey and Lois Herbst. She was preceded in death by her parents; her husband, Walter Hughes in May of 2008; a brother, Don Lauer in 1991; nephews, Mark and Clint Lauer and a sister, Lois Carroll. Memorials may be made to St. James Episcopal Church, in care of the Davis Funeral Home, 2203 West Main, Riverton, WY 82501. On-line obituaries are available and condolences for the family may be made at: thedavisfuneralhome.com Services are under the direction of the Davis Funeral Home of Riverton.