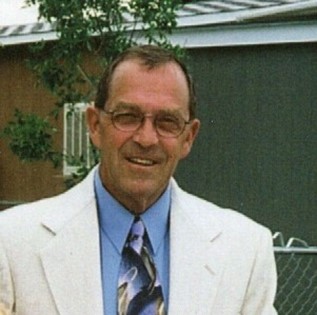 Guestbook 18
Funeral services for Jimmy Lee “Jim” Giddings of Riverton will be at 10 a.m. Monday, Dec. 21, at the United Methodist Church of Riverton. The Rev. Mark Thurman will officiate. Interment will follow at Mountain View Cemetery in Riverton. There will be a viewing from 5 to 7 p.m. Sunday, Dec. 20, at the Davis Funeral Home of Riverton. Jim Giddings died Wednesday morning, Dec. 16, 2009, at the Hospice Home in Riverton. He was 69 years old. Jim Giddings was born in Bayard, NE, on Jan. 20, 1940. He was the son of Wayne Stafford Giddings and Margaret Crystay (Osgood) Giddings. He graduated from Hastings (NE) High School with the Class of 1959. Jim moved to Riverton in 1959 to live with his brother Jerry. He worked with Jerry at Giddings Construction from 1959-60 until he joined the United States Navy in 1960, serving stateside in California during the Vietnam War until 1964. On Jan. 24, 1968 he married Sharon Rodeman Higgs. A son, Michael, was born into this union in 1970. Jim adopted Sharon’s children Rhonda and Jeff. The couple divorced in 1974. From 1966 to 2002 Jim was employed by Sweetheart Bread. After retirement, Jim became club manager of the Riverton B.P.O. Elks Lodge #1693 until his health would no longer allow it. On Nov. 12, 1977, he married Sharrel Irene Hodges in Elko, NV. Jim chose to add to his family and adopted Sharrel’s two sons Trent and Mike "Jim Bob" in 1984. His family expressed that Jim was an avid bowler and enjoyed watching his children play sports. He thoroughly enjoyed the time he spent with his grandchildren. The Giddings family was presented the Riverton Bowling Association Family of the Year in 1999. Jim served as president of the Young American Bowling Association, and president of Riverton Bowling Association. Jim held the office of Tiler for the Riverton B.P.O. Elks Lodge #1693 for several years. He received Elks Officer of the Year in 2004-2005, 2005-2006 and 2008-2009. Survivors include his wife, Sharrel of Riverton; sons, Trent and his wife Trena of Dover, DE, Mike "Jim Bob" and his wife Kathy of Denver, CO, and Jeff and his wife Susan of Papillion, NE; a daughter, Rhonda Dailey and her husband Michael of Lander; 14 grandchildren, Kyle Bailey, Tyler Giddings, Kaitlyn Giddings, Kayla Callaway, Austin Giddings, Bailey Giddings, Blain Giddings, Brittney Giddings, Parker Giddings, Nic Willey, Garth and his wife Anna Dailey, Zach Dailey, Michael Dailey, Jr., and Amy Dailey; four great grandchildren, Hannah Dailey, Gracelynn Dailey, Landyn Dailey, and Haydn Edlund; brothers, Jack Giddings and his wife Jane of Hastings, NE, and Larry Mace and his wife Jane of Gladys, VA; a sister, Pat Mace of Hastings, NE, sister-in-laws Betty Giddings of Riverton, WY, and MaryAnn Mace of Los Angeles, CA; Mother and Father-in-law Ruth and Shelby Hodges of Rupert, ID, as well as numerous aunts, uncles, nieces and nephews. He was preceded in death by a son, Michael Giddings; brothers Jerry Giddings and Kenny Mace; his father, mother, step-father, and a sister, Janice Giddings. On-line obituaries are available and condolences for the family may be made at: thedavisfuneralhome.com. Memorials can be made to the Riverton Elks Lodge or to the donor’s choice, care of Davis Funeral Home, 2203 W. Main, Riverton, WY 82501. Services are under the direction of the Davis Funeral Home of Riverton. A dinner will be served following the services at the Riverton Elks Lodge.