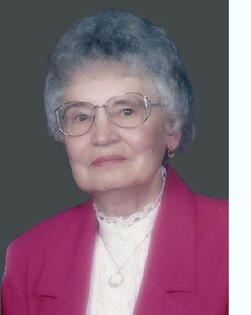 Guestbook 2
Gloria M. Pfisterer of Riverton died at the Help for Health Hospice Home in Riverton Monday morning, Dec. 21, 2009. She was 83.

Memorial services will be at 11 a.m. on Monday, Jan. 4, at the United Presbyterian Church of Riverton with the Rev. Linda Norris officiating.

Cremation has taken place and inurnment will be at Mountain View Cemetery in Riverton at a later date.

The family moved to Riverton from Lyman in 1933 and she was graduated from Riverton High School with the Class of 1944.

On June 23, 1945, she married Walter Pfisterer in Lander. Mrs. Pfisterer worked as the bookkeeper for the family business, Service Plumbing.

She was a member of the Presbyterian faith.

Her family said she enjoyed her grandchildren, doing word puzzles, crocheting, and cooking.

She was preceded in death by her parents; an infant daughter, Linda; brothers, George Loghry in World War II, and Charles Loghry; sister, Wilma Howard of Valentine, Nebr.

Memorials may be made to the Help for Health Hospice Home, in care of the Davis Funeral Home of Riverton, 2203 West Main, Riverton, WY 82501.

On-line obituaries are available and condolences for the family may be made at:thedavisfuneralhome.com.