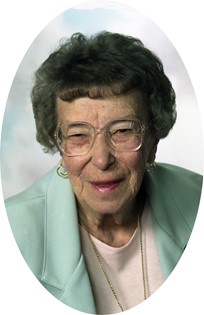 Cremation has taken place and no services will be held according to her wishes.

Bernice Grace Lamberton was born in Mankato, Minn., on Jan. 15, 1914, the daughter of Alfred and Grace (Hodgkins) Lamberton. She grew up in St. Peter, Minn., where she was graduated from high school and then went on to attend Mankota (Minn.) State Teachers College, receiving her degree in education. She moved to Riverton in 1945.

Mrs. Hepp taught elementary school at Jackson and Ashgrove from 1960, retiring at the age of 65 and then worked at the Riverton Library. With her husband, she managed the American Legion Club when it was located at Third and Washington in Riverton.

She was a member of the Ponderosa Club service organization, P.E.O., Progressive Women's Club, American Legion Auxiliary, Riverton Eagles, and B.P.O. Does.

Her family said she enjoyed playing bridge, weekly coffee club with friends, and, with her husband, cutting firewood for many people.

She was preceded in death by her husband, Carl Hepp; her parents; two sisters, Martha Wilson and Harriett LaCroix, and a brother, Richard Lamberton.