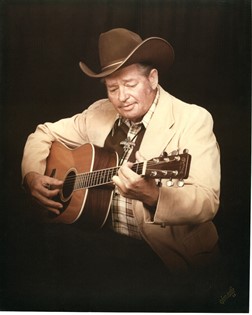 Cremation has taken place and memorial services will be at 10 a.m. Friday, Jan. 29, at the Davis Funeral Home of Riverton with his son-in-law the Rev. Hilmer Kiser of Seward, Alaska, officiating.

Committal rites by the Veterans of Foreign Wars will be at Mountain View Cemetery in Riverton.

Mr. Poff married Anne Patricia (Pattersen) in Laguna Beach, Fla., on Aug. 8, 1944, where he was serving in military service.

He was of the Protestant faith

Mr. Poff was a heavy equipment operator who had worked as a coal miner and uranium miner for Kiewitt’s Mining.

He had lived in Riverton for the past 41 years, with some time in Dayton and Sheridan.

Mr. Poff had owned and operated Bob's Kenai Lake Lodge in Cooper Landing, Alaska, had been a police officer in Riverton, farm boss at the Wyoming Honor Farm, farmer, rancher, and in civil service with the Air Force at Elmendorf Air Force Base in Anchorage, Alaska, maintaining roads and grounds in the bush.

His family said Mr. Poff enjoyed singing, playing the guitar and dobro, doing leather work, writing cowboy poetry, children's stories and songs. He sang with Patsy Kline and on the Grand Ol' Opry, and recorded an album and several single records in Nashville, Tenn. The family said he was proud of his family and their accomplishments.

He was a member of the Veterans of Foreign Wars, American Legion, Wyoming Peace Officers, Cowboy Poetry Association, and Union 301 Operating Engineers.