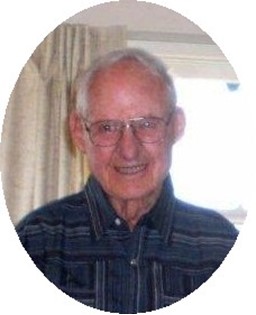 Guestbook 0
Bus Darlington was born in Longmont, Colorado on March 24th, 1917 to Elmer Darlington and Mary Schlupp. He moved to Lander at a very young age. He grew up during the Great Depression and learned gardening, hunting and fishing to help feed his family.

As a youth, he worked at his father’s pool hall on Main Street and learned to master the game early on.

He attended Colorado State University and joined the military shortly thereafter. He served as an artillery captain in General Patton’s Army and blasted his way through Europe, helping defeat the Nazi empire. During the war, he lost his sight in one eye.

He returned to Lander at the end of World War II and worked at the gambling tables in Hudson. He soon entered a partnership with Gene Shaeffer and managed the Teton Drug Store on Main Street until his retirement.

His true passion was the outdoors, and he spent most of his lifetime as a fur trapper and hunting guide. The timberline lakes of the Roaring Fork drainage never had any fish until Bus Darlington packed in tanks of brook trout on his back. The favorite lake that he stocked is named Bus’s Lake, which is a couple of miles upstream from Sheep Bridge. If you should catch a five-pound brookie from the lake, it would make him proud.

He always told his friends and family that Fremont County was the finest place on earth, and many that knew him considered him to be the toughest man on the mountain.

He is survived by his daughter, Cindy Steadman of Bailey, Colorado, and her two children, Shane and Jaimie; his son Rocke Darlington and his wife Donna of Terrebonne, Oregon and their children, Cora and Duane. His good friend and nephew, Devin Dennis of Lander helped him through his last days. He had numerous nephews and nieces whom he liked to take fishing.

Bus's family would like to extend an invitation to all of his friends tojoin us in an informal gathering at the Lander VFW, Saturday, February 5th at 2:00 p.m. We will be celebrating a life that has been and will continue to be an inspiration to everyone that knows and loves him. He has left a legacy that will always be remembered. We love you dad, you will be greatly missed!