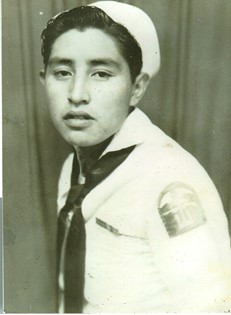 Guestbook 1
Funeral services for Raymond T. Addison, Sr., of Ethete will be at 10 a.m. Wednesday, Feb. 24, at St. Stephen's Catholic Church south of Riverton. Interment will follow at the Arapaho Catholic Cemetery at St. Stephen's.

There will be a rosary at 7 p.m. Monday at the Davis Funeral Home of Riverton with a second rosary at 7 p.m. Tuesday, Feb. 23, at St. Stephen's. A wake will follow at Eagle Hall on Tuesday.

Mr. Addison died Friday evening, Feb. 19, at the Lander Regional Hospital. He was 85.

He was born January 10, 1925, son of Burt and Mary (Clincher) Addison in Pine Ridge, South Dakota.

Mr. Addison served in the United States Navy from 1943 until 1946 during WWII.

He married Roslie Brown, who he later divorced. He then married Susan E. Little in 1974 in Casper, WY.

He was a member of the American Legion Post #84. He enjoyed playing baseball, basketball, bowling, and coaching kids in sports on the reservation.

Mr. Addison worked as a laborer, carpenter, and ranch foreman for the Arapaho Ranch. He lived in Thermopolis for several years before moving to Ethete in 1998.