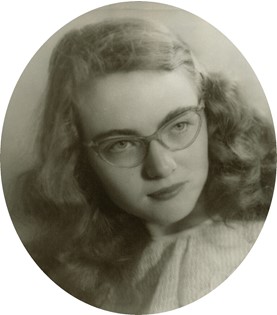 Guestbook 5
On Saturday morning of February 20, 2010, Alma Jane Judson died at her home in Riverton. She was with family members and had just spoken of the pictures she used to paint on the windows of her home during Christmas time when she fell asleep. Born Alma Jane Kepler on April 12, 1930 in McGrew, Nebraska, she was the only child of Silas Lester (Jack) Kepler and Alice Julia Kepler. Jane—as she preferred to called—spent most of her youth in the tiny Kansas town of Russell Springs, where her father supported the family during the Great Depression on a small truck farm. Nearly every day in Russell Springs Jane played, worked, or studied with her three cousins (Janet, Mary, and Joann), who were as close to her as sisters and would remain so throughout her life. She graduated from Russell Springs High School in the spring of 1947 and later that same year married Ruben Alvin (Alvie) Younkin of Monument, Kansas, a young pilot who had recently been discharged from the Army Air Corps in the wake of World War II.

In 1949 Jane and her new husband began a new stage of their lives when, as a veteran, Alvie was granted a homestead in the then new Reclamation District known as Third Division, located in central Fremont County, Wyoming. Jane and her husband—along with her father Jack and her mother Alice, who also made the move from Kansas as homesteaders—were among the original settlers on Third Division. Jane’s first home on the land north of Five Mile Creek was a sheep wagon and her first permanent house had two rooms and a pathway between them. On their farm Alvie and Jane had two sons, and she was carrying a third son when Alvie was killed in an accident in July of 1951, leaving Jane alone to manage her farm and to care for three young boys. In November of 1953, Jane married Dean E. Judson of Wheatland, Wyoming. Together they had a fourth son, although the marriage ended after seven years, and Jane returned to Fremont County to raise her children.

In 1967 Jane went to college at the same time her oldest sons did. She first attended Casper College and then the University of Wyoming at Laramie. After graduating with a Bachelor of Arts Degree in 1972, she moved to Dubois, where she would live for the next thirty-six years and would enjoy what was, without doubt, the happiest portion of her life. In Dubois she would work as a school librarian and teacher and would teach literally hundreds of young students how to read. Even after she retired from her position in the public school, Jane would continue to volunteer to teach reading and to read to young children.

Jane loved her family and her students, her cats, and to fish in the mountains, and—of course—to read. After her eyesight began to fail she would obtain books on tape from the Utah State Library and listen to what she could no longer see. She was active in St. Thomas Episcopal Church, where she was a lay reader, and loved her friends at the Senior Center and throughout the Dubois Community and the Dubois School District. Above all, she loved Fremont County, wherein she had worked as a bank teller in Lander, raised her sons in Pavillion, taught in Dubois, and lived the last two years of her life in Riverton. She said she was home when she could see Shoshoni from Highway 20-26 or when she passed Devil’s Gate on 287, and she left home when she went over South Pass or crossed Togwotee Pass. Jane will now never have to leave her home again.

A memorial service for Mrs. Judson will be head at the Headwaters in Dubois on Thursday, March 4th at 4 P.M. Everyone who knew her is invited. Memorial contributions to Mrs. Judson can be made to the Dubois Branch Library.