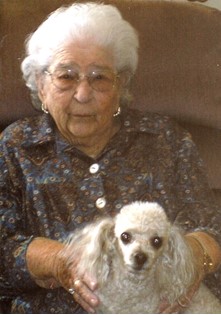 She was born October 26, 1915 in Clairmont, Wyoming, daughter of George and Margaret (Sinner) Neiberger. On May 1, 1917, when Rosie was 2 years old, she and her family moved to Riverton. Growing up on the family farm, she always had many pets starting with bum lambs and chickens and had a great love for dogs including Jacques who survives. After graduating from Riverton High School, she went to work as a bookkeeper for LeClaire Irrigation Co. She also worked as a bookkeeper for Lichty’s and worked as a legal typist.

She was a member of the Trinity Lutheran Church and the Lions Club. She enjoyed gardening and going on vacations when invited and no one went hunting or fishing without Rosie. She also loved to do needlework and shared it with her friends and family. She never officially became a grandma, but many children loved her and called her grandma. Her laughter and love of life will be missed all.

She was preceded in death by her parents, 6 siblings, Molly Walesky, Walter, Victor, John "Jack", George “Red” and Elizabeth Neiberger.

Memorials may be made to Donor's choice.