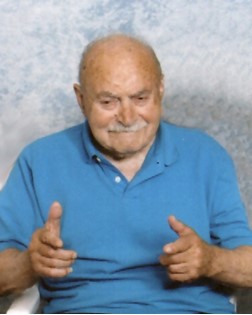 Guestbook 1
Frank Evagelatos died on Wednesday, March 3, 2010, at Westward Heights Care Center in Lander. He was 92. A memorial service is scheduled for 1:30 p.m. on Monday, March 8, at Traver McCurry Funeral Home in Catskills, N.Y., followed by interment, with military honors, in St. Patrick's Cemetery there. A viewing will be held from 5 to 8 p.m. on Sunday, March 7, at the Traver McCurry Funeral Home. Frank Evagelatos was born on June 8, 1917 on the island of Kefallonia, Greece, to Gerasimos and Metrodora (Dendrinos) Evagelatos. He left school at an early age and worked as a goat herder to help provide for his family while his father was away with the Greek Army and, later, when his father immigrated to the United States. At the age of 14, he immigrated alone to the United States. He settled in New York City with his father and worked as a dishwasher. His family said he learned English by translating the comics in old newspapers, using a Greek-English dictionary. In 1941, Mr. Evagelatos married Carmella Marra and they settled in Brooklyn, N.Y. The couple had a daughter, Metrodora "Metty." During World War II, Mr. Evagelatos enlisted in the U.S. Army and was assigned to the 17th Airborne Division. He served as a mess sergeant in the Ardennes, France, during the Battle of the Bulge. After the war, he and Carmella had two more children, Marina and Gerard "Jerry." In 1953, Mrs. Evagelatos died of a heart condition. In 1960, Mr. Evagelatos married Rosanna Fremgen. The couple later moved to Catskill, N.Y., where he worked as a cook and also owned and operated a Greek restaurant, The Pegasus. The second Mrs. Evagelatos died in 1999, and in 2005, Mr. Evagelatos moved to Riverton to live near his son, Jerry. His family said Mr. Evagelatos enjoyed gardening, history, politics and spending time with family and friends. They said he was known for wearing red socks every day. Mr. Evagelatos was preceded in death by his wife, Carmella; wife, Rosanna; parents, Gerasimos and Metrodora; brother, Spyro, and brothers-in-law, Tom Haralabatos and John Veliotis. Survivors include daughters Metrodora "Metty" Fredricks and husband Tom and Marina Evagelatos; son, Gerard Jerry Evagelatos and wife Nancy of Riverton; sisters, Maria Haralabatos and Helen Veliotis; granddaughters Jennifer Fredricks and husband Harvey Schuckman), Rose Fyock and husband Chris, Heather Robertson and husband Joshua, and Kimberly Beck and husband Gavin; great grandchildren, Jacob Schuckman, Dylan Schuckman, Madeline Fyock, Alexander Fyock, Zada Robertson and Samson Beck. Memorials may be made through the Davis Funeral Home, 2203 West Main Street, Riverton, WY 82501, for the benefit of the village of Komitata, Kefallonia, Greece. On-line obituaries are available and condolences for the family may be made at: thedavisfuneralhome.com Services are under the direction of the Davis Funeral Home of Riverton.