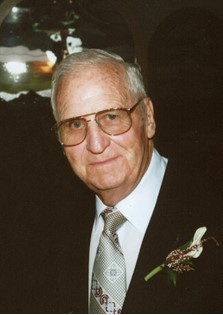 Guestbook 1
Vern Trompke died at his home in Riverton on Friday, March 5, after a lengthy battle with cancer. Funeral services will be at 10:30 a.m. Saturday, March 13, at St. Margaret's Catholic Church in Riverton with the Rev. Father Andrew Duncan officiating. Burial will be in the Hudson Cemetery at a later date. A rosary will be at 6 p.m. Friday, March 12, at St. Margaret's Catholic Church. LaVern Trompke was born in Loup City, Neb., the son of Frank and Maggie (Kosmiski) Trompke. He was one of six children. They family lived in Loup City until he was four years old. In 1932, the family moved to Bushell, Neb. He attended a one-room country school until entering high school in Kimball, Neb. Following high school graduation in 1945, he enlisted in the U.S. Navy, successful on his second try. At the age of 16, he had enlisted and was within hours of shipping out when his father found out and retrieved him after his real age was revealed. Mr. Trompke was honorably discharge in California in 1947. He came to Riverton to visit relative and look for work. He met his future wife, Ella Darlene Van Vleet in Hudson in 1948 and they were married at the Church of the Ascension in Hudson on June 15, 1949. The couple lived in Fremont County while Mr. Trompke worked for the Bureau of Land Management in the construction of Boysen Dam. While living and working at the dam site, a son was born in March of 1951 and a daughter in November of 1952, both in Lander. Mr. and Mrs. Trompke moved to a farm on Snavely Lane. Both farmed and worked at the Wyoming State Training School from 1951-1954. Mr. Trompke quit farming and went to work for Shell Oil Company in Buffalo and in Baker, Mont. In 1958, Mr. Trompke took a job as a chemical engineer with Tretolite Chemicals in Kimball, Neb. where they lived until 1972. From Kimball, they moved to Vernal, Utah, Denver, Colo., Levelland, Texas, and returned to Riverton to retire in 1988. Mr. and Mrs. Trompke bought a motorhome and started traveling, spending their winters in Yuma, Ariz. His family said Mr. Trompke loved traveling, fly fishing, camping, gardening, visiting with friends and family, and helping others. He was a member of St. Margaret's Catholic Church, the B.P.O. Elks Lodge, Eagles Lodge, and the Veterans of Foreign War. Mr. Trompke is survived by his wife of nearly 61 years, Darlene; a son, Lawrence "Larry" and his wife Myrna of Riverton, their children, Tanya and her husband Keith of Chandler, Ariz., Larry Trompke, Jr., of Billings, Mont., and Kristi of Riverton; a daughter, Linda Dee Trompke and Sue Ransom; a brother, Leonard and his wife Vivian of Conran, Mo.; sisters, Darlene Hobbs and her husband Jim of Ames, Iowa, and Lilian Weyer of Sunnyside, Wash.; numerous nieces and nephews. Mr. Trompke was preceded in death by his parents; a brother, Hank Trompke, and a sister, Evelyn Clelland. Memorials may be made to St. Margaret's Catholic School or the Hudson Cemetery Fund, in care of the Davis Funeral Home, 2203 West Main, Riverton, WY 82501. On-line obituaries are available and condolences for the family may be made at: thedavisfuneralhome.com Services are under the direction of the Davis Funeral Home of Riverton