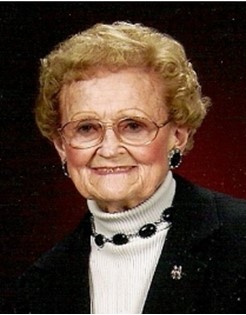 Guestbook 2
Ruth Short of Riverton died Wednesday, March 10th at Pioneer Manor in Gillette, WY. She was 95 years old. Services will be held Wednesday, March 17, 2010 at 2:00 P.M. at Trinity Lutheran church with Pastor Magruder officiating. Burial will follow at Mountain View Cemetery. A viewing will be held Tuesday, March 16th from 7 to 8:00 P.M. at the Davis Funeral Home. Ruth Wilhelmina Bergstrom was born August 21, 1914 in Mandan, ND to Arron Bergstrom and Clara Williams. She was baptized by her grandpa, Rev. P.O. Williams, a Lutheran Minister. Ruth attended schools in the area and graduated from Almont ND High School. She then attended Christy Beauty School in Bismarck, ND. Her first job was in Thermopolis, WY. A year later, Ruth met her husband Raymond at a local dance and they were married on November 25, 1935. She and her husband Ray had three children, Raymond Jr., Penny and Leonard. Ruth and Ray started a photography business where they developed film for the drug store, and later Ray leased the Standard Service station in Thermopolis. When World War II broke out, they moved to Cheyenne, WY and Ray became the Fire Chief for Fort Warren Base. Later, they moved back to Lucerne, WY to farm. In 1946 they moved to Riverton, WY where Ruth and Ray ran the Ice Box Market and Deli. Ruth went on to work for George Girard as a bookkeeper for 41 years. Ruth’s husband Ray passed away in 1985 and her son Leonard III passed in 2003. Ruth continued living on the farm until she was 90 years of age. She then, bought a home in Seratoma West. Shortly after she had a stroke and resided in the Riverton and Gillette, WY Nursing Homes. Ruth passed away at the Pioneer Manor in Gillette, WY. Surviving family members include her son and wife, Ray and Mary Short; her daughter and husband, Penny and Bob Means. She had 5 grandchildren, 10 great grandchildren, and 2 great-great grandchildren. Two sisters, Beatrice Shepherd of Riverton, WY and Zoe Louton of Beatrice, NE; one brother, Howard Willman of San Jose, CA. and many nieces and nephews. Ruth was preceded in death by her husband Ray, her son Leonard, her granddaughter Cory, her great granddaughter Brigette and her 3 brothers, Clifford Bergstrom, Erling Willman Jr. and Russell Willman.