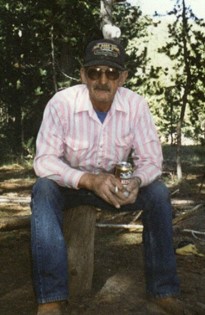 Guestbook 4
Ronald "Babe" Krause died on Friday, April 23, 2010, at Riverton Memorial Hospital. He was 71. Services are at 2 p.m. on Saturday, May 1, at the Pavillion Methodist Church in Pavillion. The Rev. Cleve McSwain officiates. A gathering for family and friends will be held at the Pavillion Recreation Center following the memorial service. Ronald Krause was born on July 12, 1938, to Myrtle and Henry Krause in Green River. His mother later married Edward Parker and lived in Lander and Riverton. He attended school in Lander. Mr. Krause met Donna Hecox from Pinedale and they married on Dec. 14, 1958. The couple moved to Pinedale and worked for the Dew family at the O-Y Ranch before moving to the Hecox homestead. They both worked for the Circle S Ranch for years before starting their own outfitting business. They had three children -- Disney, Lori "Sam," and Ronnie "Festus." They divorced in 1977 and Mr. Krause moved back to Riverton. He worked for Logan Meat Packing and the city of Riverton for years. He married Darlene Shipper of Kinnear on May 19, 1990. Mr. Krause spent the remaining years farming their place and haying for many neighbors in the area. His family said Mr. Krause enjoyed hunting, fishing, camping, pack horse racing and dancing. He participated in the Rendezvous pageant in Pinedale for many years as a trapper and Chief Ma-Wo-Ma. The family said enjoyed going back every year to watch it. His family said Mr. Krause's biggest love was the mountains. They said he enjoyed spending summers and fall camping, hunting, and cutting firewood with his family. Mr. Krause was a skilled leatherman. He operated his own boot repair and leather shop for many years both in Pinedale and Lander. He is survived by his wife, Darlene of Kinnear; daughters, Disney Brunette of Pinedale, and Lori "Sam" Moore of Billings, Mont.; son, Ronald "Festus" Krause and his wife, Christi of Cora; daughters, Tonya Albrandt and husband, Shawn of Farson, and Pam Johnson and husband Austin of Kinnear; grandchildren, Kendall and Jake Brunette, Sage Trehearne, Brittney Givens, Jaimie Moore, Cora Krause, Melisa, Jenny, Gracie Albrandt, and Justin Johnson; great granddaughter, Brook;  his brother, Dutch Krause and wife Shirley of Lander; step-brother, Joseph Parker of Fairbanks, Alaska; half-brother, Ernie Krause, and half sisters, Jenny Williams, Barbara Gibson, and Kathy Barney. He was preceded in death by his parents; step-father, Eddie Parker; sister, Hazel Helmers; brothers, Richard and Phil Krause, and half-sister Terry Noski. On-line obituaries are available and condolences for the family may be made at: thedavisfuneralhome.com Services are under the direction of the Davis Funeral Home of Riverton.