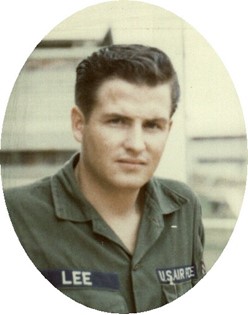 Guestbook 1
Johnnie D. "Doug" Lee of Lander died Tuesday evening, May 4, 2010, at Westward Heights Care Center in Lander, after a short illness. He was 64. Graveside services are at 11 a.m. on Monday, May 10, at Mount Hope Cemetery in Lander. Bob Elden will officiate and Masonic Lodge committal rites will be conducted by Wyoming Lodge #2 AF & AM. VFW Post #954 & #4799 will conduct military Honors. Johnnie Douglas Lee was born in Lander on June 26, 1945, the son of Johnnie D Lee and Jeanne (Smail) Lee. He grew up on the Lee Ranches on South Pass, attending schools in Lander and being graduated from Fremont County Vocational High School in Lander in 1963. He then attended Northwest Community College in Powell for one year and then Casper College for one year before enlisting with the U.S. Air Force during the Vietnam War. He was stationed at Lackland Air Base in Texas, during which time he married Shirley Durfee. She traveled to the various bases with her husband who was stationed at the Lowry Air Base in Denver, Colo., and then at the Strategic Air Command Base in Glasgow, Mont. From there he was sent to Vietnam, 1968-69, and then to George Air Base in California. He was honorably discharged as a Staff Sgt. In 1970. The couple then returned to Casper where he worked for a time for an oil field equipment service company. Then they moved back to Lander and Mr. Lee worked in the Gas Hills for a short time before taking a job with Hercules Co., and U.S. Steel. He then joined Union Oil of California as a foreman, retiring from that company several years later. Since that time, he worked in Riverton and Lander and retired two years ago. Mr. Lee is survived by his son, Garrett Lee; grandson, Dillyn, of Lander; his mother, Jeanne Lee and companion Ben Weeks; brother, Steve and his wife Tammy of Lander; sister, Kathy Lee of Pinedale; nephew, Tyson; nieces, Amy and Joni; a great nephew, two great nieces, and many cousins. Memorials may go to a fund for his grandson, Dillyn's college education, in care of the Davis Funeral Home, 2203 West Main, Riverton WY 82501. On-line obituaries are available and condolences for the family may be made at: thedavisfuneralhome.com Services are under the direction of the Davis Funeral Home of Riverton.