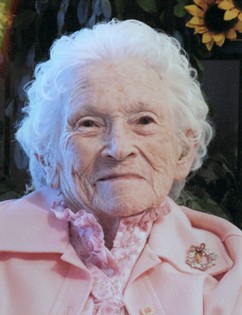 Guestbook 1
Ethel P. Drake died on Tuesday, May 4, 2010, in Jackson at the age of 96. Funeral services are at 10 a.m. on Friday, May 7, at the Davis Funeral Home of Riverton with interment to follow at Mountain View Cemetery in Riverton. Viewing is from 4 to 6 p.m. on Thursday, May 6, at the funeral home. Ethel Pearl Randolph was born in Independence, Kan., on Dec. 28, 1913, to Reuben T. and Martha May Randolph. She moved with her parents to the Salt Creek oil fields at Midwest in 1925. There she attended elementary school and high school. She was graduated from high school back in Independence. She moved to Arapahoe on the Wind River Reservation in 1934 as assistant to missionary Lydia Wood. It was at Arapahoe that she met William F. "Joe" Drake. They were married on May 23, 1935. Mr. and Mrs. Drake lived and raised their family of four children on their family farm at Arapahoe. Mrs. Drake was a housewife and mother. In addition, she worked as a cook for the school lunch program in Riverton and Arapahoe for 14 years, and was head dietary cook for Riverton Memorial Hospital for 10 years, until her retirement in 1977. Following retirement, Mr. and Mrs. Drake raised a large garden at their farm at Arapahoe. Mrs. Drake was a charter member of both the Arapahoe Homemakers Extension Club and the Arapahoe Grange. Her family said Mrs. Drake had a green thumb. In addition to gardening and outdoor flowers, they said her love of growing could be seen in the variety of house plants she kept. African violets were her favorite, the family said. The family said Mrs. Drake enjoyed handwork, both crocheting and embroidery, and she collected China teacups and saucers. Mrs. Drake is survived by sons, Richard and his wife Pat, Bill and his wife Marsha; daughters, Wanda Davidson and Connie Woolwine and her husband Willard; seven grandchildren, 12 great grandchildren, and three great-great grandchildren. She was preceded in death by her husband, Joe; daughter-in-law, Myra Lou; her parents, and all her siblings. On-line obituaries are available and condolences for the family may be made at: thedavisfuneralhome.com Services are under the direction of the Davis Funeral Home of Riverton.