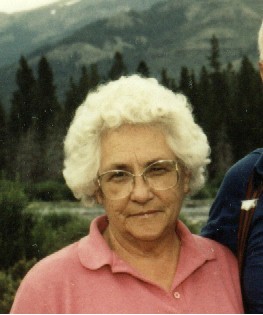 Guestbook 6
Beulah F. Novotny died at Riverton Memorial Hospital on Friday, May 14, 2010, at the age of 85. Graveside services are at 2 p.m. on Wednesday, May 19, at Mountain View Cemetery in Riverton. The Rev. Mark Thurman will officiate. A viewing is from 1 to 1:45 p.m. on Wednesday, preceding the service, at the Davis Funeral Home of Riverton. Beulah Frances Stork was born in Riverton on Oct. 20, 1924, the daughter of Grant and Beatrice (Smith) Stork, one of the founding families of Riverton. She was graduated from Riverton High School with the Class of 1942. On Oct. 13, 1942, she married William Novotny in Missoula, Mont., and accompanied her husband to Bremerton, Wash., where she worked as a typing clerk at the shipping yards. After Mr. Novotny's discharge from the U.S. Navy, they returned to Riverton and raised a family of five children. She assisted Mr. Novotny with the office end of their welding contracting business for 36 years. Mrs. Novotny was the treasurer for the Riverton Order of Jobs Daughters, a member of the Order of the Eastern Star, and was a Cub Scout leader. Her family said Mrs. Novotny enjoyed sewing, gardening, and cooking. She is survived by a son, William Novotny, Jr., and his wife, Marilyn; daughters, Susan Breeden and her husband Raymond, Nancy Novotny and husband Doug Novotny; grandchildren, Jeff Novotny, Janelle Smith, Nicole Wonka, Tiffany Novotny, William Novotny III, Paul, Mike, and Mark Breeden, Edward and Ernest Novotny; four great grandchildren; daughter-in-law, Penny Novotny. She was preceded in death by her husband, William; sons, Edward and Fred Novotny; her brothers, Robert and William Stork, and her parents. Memorials may be made to a charity of the donor's choice. On-line obituaries are available and condolences for the family may be made at: thedavisfuneralhome.com Services are under the direction of the Davis Funeral Home of Riverton.