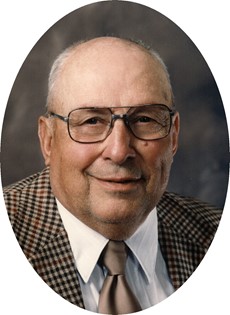 Guestbook 6
Memorial services for Raymond E. Moss of Lysite are at 2 p.m. Saturday, May 29, at the Davis Funeral Home of Riverton. Masonic rites will be by the Shoshoni Lodge AF&AM. Cremation has taken place and inurnment will be at Mountain View Cemetery at a later date. Mr. Moss died at his home in Lysite on Saturday, May 22, 2010. He was 84. Raymond Eugene Moss was born in Jenks, Okla., on Dec. 26, 1925, the son of Elisha Arthur Moss and Quinnie Mae (Murphy) Moss. He attended St. Mary's College for two years. He served with the U.S. Navy, doing his training at the end of World War II. On April 17, 1946, he married Lorraine M. Logan in Hudson. Mr. Moss was a pipeline supervisor for Amoco throughout the Rocky Mountain West for 40 years. His family said Mr. Moss enjoyed camping, hunting, fishing, golf, was an avid Ford lover and good mechanic. He was a three-time Master of the Masonic Lodge AF&AM and still an active member. He was a member of the Lysite Volunteer Fire Department for many years. Survivors include his daughter, Jeanne Ruetz; grandsons, Troy Willoughby and Daniel Ruetz; great grandchildren, Brandy and Kelsey Willoughby; sisters, Helen Snyder and Edith Price. He was preceded in death by his wife, Lorraine. Memorials may be made to the Shriners' Hospitals for Crippled Children, in care of the Davis Funeral Home, 2203 West Main, Riverton, WY 82501. On-line obituaries are available and condolences for the family may be made at: thedavisfuneralhome.com Services are under the direction of the Davis Funeral Home of Riverton.