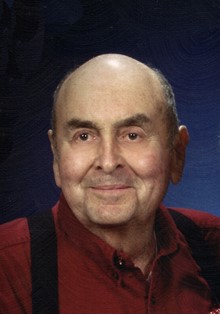 Guestbook 1
Memorial services for Eugene F. "Gene" George of Riverton are at 10 a.m. on Tuesday, June 1, at the Davis Funeral Home in Riverton. Services and burial will follow at 10 a.m. on Wednesday, June 2, at the McKibben Building on the Wyoming State Fairgrounds. Echo Klaproth will officiate. Mr. George died at the home of his son on Monday, May 10, 2010, where he was cared for in the last months of his life. Eugene F. George was born in Douglas on March 9, 1919, to Fredrick George and Beatrice (Poirot) George. He was raised on several ranches, helping support his two younger sisters after his mother died at an early age. He attended Black Bridge School and the Douglas schools. He married Edythe Chambers in Lander on May 14, 1940. They were together for 59 years and their union produced a daughter, Carol (Hall), and son, Dennis George. His family said Mr. George loved fishing and working with his hands, spending time with his family and was always interested in the activities of his grandchildren and great grandchildren. The family said he enjoyed rodeo and visiting with the various cowboys who came to the saddle shop where he worked every day with his son and grandson in the last years of his life. They said he worked several hours a day until three weeks before his death. The family said that through stories he shared his experiences as a sheep shearer, ranch cowboy, and carpenter. Mr. George worked at laying floor tile through the age of 85. He owned and operated a trucking business for many years. He became superintendent for Eagle Engineering, hauling uranium and later furnishing concrete for all the bridges on I-15. He built home in Douglas and throughout Wyoming. He was honored by a "Roast and Toast" hosted by the Converse County Home Builders, and honored for his contributions to the building trade. Mr. George is survived by his daughter, Carl Hall and her husband Larry of Elko, Nev.; son, Dennis George and wife Barbara of Riverton; four grandchildren and six great grandchildren; his sister, Betty Homer of Eugene, Oregon, and former wife, Irene Taylor Lander. He was preceded in death by his father, Fred George; mother, Beatrice; wife, Edythe George; sister, Loranine Chasner, and step-mother, Elsie George. Memorials may be made to the Help for Health Hospice Home, 1240 College View Drive, Riverton, WY 82501. Local arrangements are under the direction of the Davis Funeral Home of Riverton.