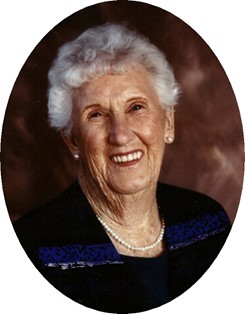 Guestbook 3
Dee N. Wilson died at the Help for Health Hospice Home in Riverton on May 31, 2010. She had celebrated her 96th birthday with family on Sept. 20.

Dee N. (Thorpe) Wilson was born on Sept. 20, 1913, on the family homestead farm in Perkins County, S.D. She was the only girl in a pioneering homestead family of five sons and one daughter born to Howard Hartson Thorpe and Blanche (Stephenson) Thorpe. She was born, as were her brothers, Lyndell Howard, Forrest Dow, Edward Glenn, Leland Earl, and Vernon Hartson, in the family's sod house.

She attended rural schools by horseback, excelling her family said in mathematics and English.

At the age of 21, she married James Cecil "Jim" Wilson of Gillette in Spearfish, S.D., on Sept. 14, 1934. Children are-- James Edward, Billie Lee, Stoney, Clayton Rickey, and Jim R.; All born in Wyoming. After several years spent primarily in Colorado and Wyoming the family settled in California where Mrs. Wilson spent the greater part of her adult life.

Following the death of her husband of 61 years in 1995, Mrs. Wilson sold her home in California and relocated to Riverton.

She was of the Catholic faith and member of St. Margaret's Catholic Church in Riverton.

Her family said she her most enjoyable activities were being with children, rock and roll music- especially Elvis Presley- gardening with roses as her favorite, cooking "from scratch" with pies as her favorite, photography, creating albums-especially family pictorial histories, reading world, national and local news, biographies, and novels, watching and feeding birds especially hummingbirds, driving her cars especial V-8s, and very important conversing with others.