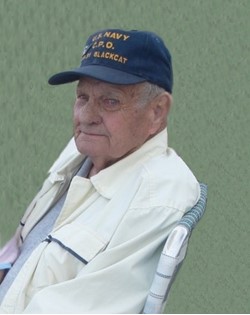 Guestbook 7
Wade L. House died at his home in Riverton on Sunday night, June 6, 2010, at the age of 86. Memorial services are at 11 a.m. on Monday, June 14, at the United Methodist Church of Riverton. The Rev. Mark Thurman officiates. Cremation has taken place and private graveside services will be at Mount Hope Cemetery in Lander. Wade Latham House was born in Lawton, Okla., on June 6, 1924, the son of Tom L. House and Balma (Bosserman) House. His childhood was spent in Edgerton, Wyo., and he attended school in Midwest. He served with the U.S. Navy in the Pacific Theater during World War II and moved to Riverton following his military service. He joined the Navy in 1941, serving three years in the South Pacific. He obtained the rank of Chief Petty Officer and was the youngest to achieve that rank his in Naval district at that time. He also received an Accommodation Decoration for service with PBY, Blackcat Squadron. Overall Mr. House served in the military for six years. He married Carol Porter in Miles City, Mont., on June 14, 1955. Mr. House was a Riverton businessman, in his early years working with his family at the Ben Franklin Variety Store. He later managed the Valley View Bowling Center and was a master drywaller for several years. His family said Mr. House was an avid outdoorsman who enjoyed backpacking, fishing, and bowling. Survivors include his wife, Carol House of Riverton; two sons, Brett House and his wife Kelli of Springville, Utah, and Trent House and wife Julie of Lander; a daughter, Melanie Wadley and her husband Tom of Riverton; 12 grandchildren, Eric House, Jay Zabriskie, Jessie House, Joshua House, Bryce House, Desirae Cornejo, Taylor House, Josie House, Dean Meredith, Greg Meredith, Kirk Wadley, and Lyndie Wadley; nine great grandchildren; a brother, Barkley House and his wife Ruth. He was preceded in death by his parents. Memorials may be made to the Make A Wish Foundation in care of the Davis Funeral Home, 2203 West Main Street, Riverton, WY 82501. On-line obituaries are available and condolences for the family may be made at: thedavisfuneralhome.com Services are under the direction of the Davis Funeral Home of Riverton.